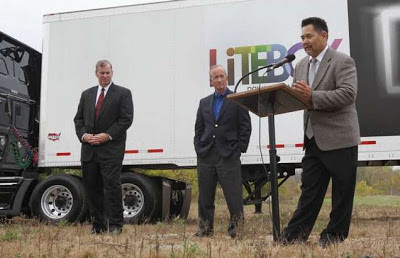 Who can forget when former Gov. Mitch Daniels and former Mayor Greg Ballard got snookered by a California charlatan touting a new start-up business that promised a thousand new jobs building mobile, digital viewing screens built into semi-truck trailers back in 2011 right before the mayor's re-election. Daniels and Ballard appeared at a highly-publicized press event right before the municipal election with the founder of the company known as Litebox, Bob Yanagihira, who turned out to be a complete fraud. Ballard and Daniels soon turned red-faced after the checkered past business record of the businessman came to light, facts which were easily ascertained from simple Google searches.

This week, the Indianapolis International Airport Authority announced it had chosen a little-known company, The Athlete's Business Network, LLC, to redevelop the highly-sought land where the former airport terminal once sat for a half-billion dollar medical sports complex, which would feature a hotel and a 20,000-seat sports stadium. The key point that came from the announcement that should have caught airport authority officials' attention was the fact ABN lacked any source of funding for the project, the assumption being that the media attention garnered from the announcement this week would propel funding opportunities for the company's founder, who seemed to line up an impressive list of partners to work with ABN on the project.

It turns out that ABN has been around for awhile, at least on paper. A limited liability company creating the business was first registered with the Secretary of State on December 1, 2009. The company, which was formed by Ice Miller attorney Michael Millikan, who served as its registered agent, was administratively dissolved by the Secretary of State's office on April 16, 2015. Ice Miller is listed as one of ABN's partners on the project at its website. The company renewed its registration with the state in 2011 but failed to do so in 2013 or 2015, leading to it being administratively dissolved. That's the first red flag. It gets much better.

The top executive for ABN is a guy named Craig Sanders, who is one of its co-founders. He touts himself as an expert in investments, financial planning and wealth management according to the Indianapolis Business Journal. The IBJ finds his business record "mixed" at best. Sanders was successful in building a network of about 200 Dunkin Donut franchises. "But the business struggled, lost millions of dollars and went bankrupt in 2009, and the chief financial officer went to prison for stealing $429,000," the IBJ reports. Sanders also filed for personal bankruptcy in 2013. "Along the way, he fell $130,000 behind on payments on his Zionsville house and failed to file tax returns, according to a report by a bankruptcy trustee. As part of his bankruptcy process, Sanders was required to complete an online course in personal financial management," the IBJ reports.

Sanders acknowledged his past financial problems in an interview with the IBJ, but he assured them that's all in the past. He pointed them to his role with two successful IT companies that were later acquired by Motorola and Corning Fiber, but the IBJ says it could not confirm he played any significant role in either of those companies. Sanders told the IBJ he and his partners have already invested $3 million in ABN, but he did not identify the source of any investors or lenders for the proposed project. Sanders provided some references for his business acumen, some of whom spoke highly of him. One reference had no recollection of Sanders but said he remembered the business, Accelera Wireless, because "we lost all of our investment on that." "It was zero," said Chris Brown of Global Emerging Markets, a New York investment firm.

As the IBJ probed Sanders for more information, he grew increasingly "agitated." "The outpouring of support behind this project is just tremendous," Sanders said. "But if Craig Sanders is a polarizing figure of this enterprise, I will just simply tell you that this business is far bigger than me. … I will absolutely step aside and make sure this project advances without me." Okay, it sounds like we're off to a great start. Good job, Indianapolis Airport Authority.
Posted by Gary R. Welsh at 5:40 PM

Ice Miller again? I don't recall the Mayor or the Gov getting red in the face or failing to be prey for other boondoggles. They just move on, you know, like so what? Even if they displayed public repentance for being slow to see....their public admission of such would never get the attention of people that the initial blunder did. See, for instance, Brian Bosma and his cherished love of Girl Scout Cookies. He may have done public penance or public admission that he was taken in but has anyone seen it praised to the skies as was his initial stupidity?
Jobs, good, high paying jobs are what people want. Politicians destroy jobs. To get elected, they have to associate themselves with jobs and promise the people jobs. Doing what is needed to actually "create" jobs....pish...that isn't their wheelhouse, talent, or ambition. Remember Evan B on stating the obvious about why he no longer needed to be in the Senate also confessed that in his own public life he had never created the first, single job. I may be remembering this wrong but I don't think so. Evan telling the truth was so unusual that not only did it stick in my mind but it also upgraded my view of his reputation.
So, any time you see a politician at some ribbon cutting ceremony or "jobs" announcement please do think of paps on a pig.

Yikes. Do these people on the Airport Authority Board and their staff members have any idea about vetting these kinds of deals? Someone should be fired for this gross negligence -- better yet, the Board members might consider resignation. Or has the climate in Indianapolis become so corrupt after the Ballard administration that it really does not matter any more....and while I am on my soapbox, would not it be nice of the city and state said no to the Coca Cola developers and relied instead on the "free market" to get the site developed? Boy, am I dreaming....

Gary, love the term "Liteboxed!" You should coin that phrase.

Anon:6:27: My thoughts exactly. Ice Miller needs to be stopped. It is highly corrupt. It attorneys should be disbarred. It seems they'll represent every charlatan with a business "idea."

Great! Airport Board needs to BRING BACK BOB DUNCAN, again, to clean up, yet another Board blunder.... poor, guy keeps having to come out of retirement.

This Airport Board, keeps finding Airport Directors not qualified to lead such efforts (economic development and large complex airport), but quickly focus on the checkbox for being a Minority, which for the SECOND time has blinded them.

Someone suggested that Economic Development is NOT the same as managing a IND (large) airport and very rare are the Bob Duncan's of the world, whom have both skill sets and able to foresee/position an airport for the future, from 30 years in the past!