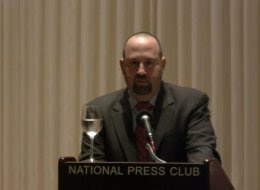 Fairfax County Police arrested a top State Department official yesterday at his suburban Virginia home on charges of soliciting sex with a minor. Daniel Rosen, 44, a director of the Department's counter-terrorism programs and policy, was arrested and taken to a D.C. jail on Tuesday night. Department spokeswoman Jen Psaki told Fox News late Tuesday, "We are aware that a State Department employee has been arrested and charges have been issued. "For issues related to Department personnel and for privacy reasons, we are not able to confirm the identity of the individual or specific charges. "His security clearance will be suspended and he will be put on administrative leave while this proceeds to its end through any judicial process. We are following standard procedure in this case."
Posted by Gary R. Welsh at 8:33 AM