NBC's Brian Williams Gets Six-Month Suspension For Making Up Stories 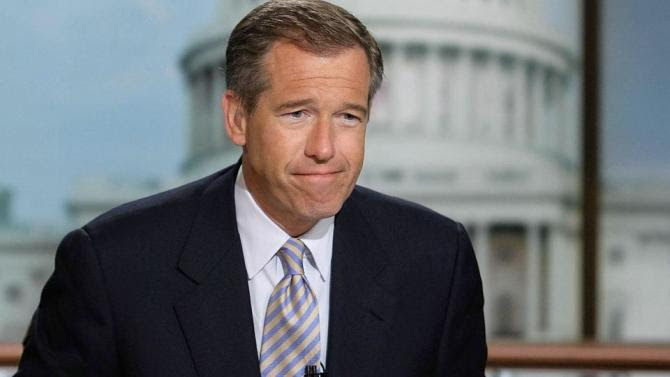 Surely this is intended as a way of leading NBC News anchor Brian Williams to the exit door. The Drudge Report has published this internal memo issued by NBC News President Deborah Turness announcing the news division's decision to place Williams on a six-month suspension without pay for making up stories.

We have decided today to suspend Brian Williams as Managing Editor and Anchor of NBC Nightly News for six months. The suspension will be without pay and is effective immediately. We let Brian know of our decision earlier today. Lester Holt will continue to substitute Anchor the NBC Nightly News.

Our review, which is being led by Richard Esposito working closely with NBCUniversal General Counsel Kim Harris, is ongoing, but I think it is important to take you through our thought process in coming to this decision.

While on Nightly News on Friday, January 30, 2015, Brian misrepresented events which occurred while he was covering the Iraq War in 2003. It then became clear that on other occasions Brian had done the same while telling that story in other venues. This was wrong and completely inappropriate for someone in Brian’s position.

In addition, we have concerns about comments that occurred outside NBC News while Brian was talking about his experiences in the field.

As Managing Editor and Anchor of Nightly News, Brian has a responsibility to be truthful and to uphold the high standards of the news division at all times.

Steve Burke, Pat Fili and I came to this decision together. We felt it would have been wrong to disregard the good work Brian has done and the special relationship he has forged with our viewers over 22 years. Millions of Americans have turned to him every day, and he has been an important and well-respected part of our organization.

As I’m sure you understand, this was a very hard decision. Certainly there will be those who disagree. But we believe this suspension is the appropriate and proportionate action.

This has been a difficult time. But NBC News is bigger than this moment. You work so hard and dedicate yourselves each and every day to the important work of bringing trusted, credible news to our audience. Because of you, your loyalty, your dedication, NBC News is an organization we can – and should - all be proud of. We will get through this together.

Steve Burke asked me to share the following message.

“This has been a painful period for all concerned and we appreciate your patience while we gathered the available facts. By his actions, Brian has jeopardized the trust millions of Americans place in NBC News. His actions are inexcusable and this suspension is severe and appropriate. Brian’s life’s work is delivering the news. I know Brian loves his country, NBC News and his colleagues. He deserves a second chance and we are rooting for him. Brian has shared his deep remorse with me and he is committed to winning back everyone’s trust.”

Somebody told a Lie about the Iraq War. How shocking?? Our Mega-Media regularly Lies, fails to tell all the facts, slants the stories and fails to tell the whole truth.

Brian Williams should have been fired long ago. His pretty face and "hip" persona camouflaged what many close to him have described as a dishonest, lazy, arrogant, smug, self-absorbed personality with little passion for actual hard work. That this anchor, and those 1%-ers like him, is paid multi-millions to read words often penned by others is just insane.

Only in liberal-land of national news networks is being a proved liar a resume enhancer (Fareed Zakaria, anyone?) where the lib liar is never held accountable but merely held on to spout the liberal-left party line.

Like politicians, these people do not create wealth but sure know how to enjoy it.

To Anonymous 7:44:
I spent a long long time in TV news. You just described 99% of tv anchors in all markets.

Anon 10:04... I think the one exception to the rule is Indy's own Eric Halvorson at WISH-8. And yes, I know him personally, and no, I am not an immediate family member.

It sure seems that the hard working, genuine, and dedicated anchors (like Halvorson) are the most ignored and discounted. The head honchos at the news departments must prefer vacuous over substance and brains.

Do any of the talking heads actually do any real investigative reporting or are they just pablum spewers fed by their editors? Methinks this guy isn't the only one who should have his nose in the corner.

I'm sure Brian can be an anchor at Faux News where lies are protected by the Constitution.