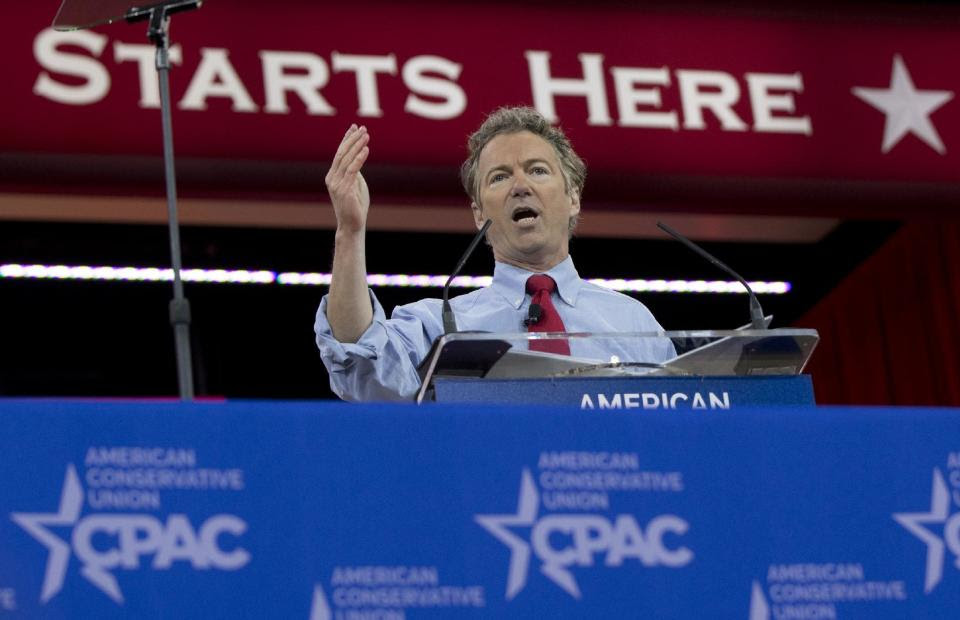 Sen. Rand Paul was the choice of about 3,000 conservative activists in attendance at this year's Conservative Political Action Conference in Washington. He led the field  in a straw poll of potential candidates for the 2016 presidential nomination with 25.7% followed by Wisconsin Gov. Scott Walker, who polled a close second at 21.4%. Sen. Ted Cruz was a distant third with 11.5%. Former Florida Gov. Jeb Bush got edged out by political novice Ben Carson for fourth place. Carson had 11.4% to Bush's 8.3%. All other potential candidates, including Chris Christie, Marco Rubio and Mike Pence polled less than 5% of the vote.
Posted by Gary R. Welsh at 10:10 PM

Fear not; despite this the Party of Stupid will give us Bush/Pence in 2016.

Reince Priebus, like Karl Rove and all the eastern Establishment RINO Republicans, are working to snatch defeat from the jaws of victory and are pushing career opportunists like Jeb Bush and Indiana's own perpetually scowling, philosophically shallow Mike Pence.

Why the luster-less Mike Pence believes he is a viable POTUS candidate proves he is so far out of touch with reality and the people that he may as well be on Uranus. I have to admit I did not fully realize how poor a thinker and a political steward Mike Pence is until he came home to warm the governor's chair while waiting to run for POTUS. Pence, go get a real job.

Jeb Bush, Mike Pence, and Chris Christie can be counted on to give America more of the same political tripe that took us to where we are today.

Proving my point that the 25% voting for a Paul are the RINOs/CINOs since the 75% are absolute bloodthirsty chickenhawk warmongering Israel-firsters in the pocket of the Military-Industrial Complex. This Paul is a shadow of his father so will not bring me out of voting retirement. I'd consider supporting some kind of third party fusion ticket of Jim Webb-Rand Paul (or Justin Amash-type) in the general, though.

On what planet does Eric Morris live?

While Paul is 99 percent the ideal American candidate, that 1 percent is pretty bad. Libertarians are for open borders. Just the same, I won't be voting rino if I vote at all.

Anon 902: I may be on the wrong planet but at least don't remain living in a STATE of DENIAL. Repugs are born warmongers, starting with Saint Abraham Lincoln.

Actually, the GOP circa 1900-1950 was rather non-interventionist. Sen. Taft & Rep. Lindbergh were both staunchly anti-imperialist.

LamLawIndy, that also happens to be the Republican tradition in which I was raised and further demonstrates that like-minded have always been a limited factor in the GOP. The Repubs save for a few like Lindbergh and Rankin wanted Wilson to go to war sooner in WWI and Taft never got the nomination.

In 1934, a decorated World War I general, Smedley Butler, blew the whistle on an a plot by Wall Street financiers to overthrow the U.S. government and install a Nazi dictatorship. The folks behind this plot were the very same folks who covertly financed Hitler's Third Reich and profited handsomely by first financing the Nazi's military march across Europe and then profited even more greatly from the spoils of the allied forces effort to beat the Axix Army they financed. President Roosevelt's government could have tried and convicted these evil people for treason and vanquished their influence in this country. Instead, he made a faustian bargain with them that ensured the eventual entry of the U.S. government into their manufactured war that cost the lives of millions of innocent people. Ignorant people believe the Nazis lost WW II. Neither political party can claim moral superiority. Look at President Andrew Jackson. How many native American Indians did he have slaughtered in defiance of orders from the U.S. Supreme Court to remove them from their land?