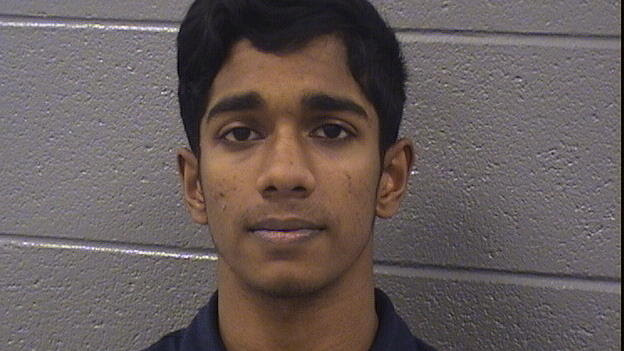 A 19-year old University of Illinois student at the school's Chicago campus told police he was only re-enacting scenes from "Fifty Shades of Grey" after he was arrested for sexually assaulting a 19-year old female student in his dorm room. The first-year student, Mohammad Hossain, "appeared shocked" according to the Chicago Tribune after a judge ordered his bail set at $500,000 before he was sent back to the lock-up after his initial appearance. Judge Adam Bourgeois, Jr. asked Hossain's counsel, "Sandra, how can someone involved in all that let a movie persuade him to do something like this?" "He would say that it was consensual," she replied. The Tribune describes the sexual assault Hossain is accused of committing:


Once inside his dorm, in the 900 block of West Harrison Street, Hossain allegedly asked the woman to remove her clothing and she did, keeping on her bra and underwear, Karr said. He then bound her hands above her head and to a bed with a belt, used another belt to bind her legs and stuffed a necktie into her mouth, Karr said.

Hossain used a knit cap to cover the woman's eyes, Karr said, and removed the woman's bra and underwear. He then began striking the woman with a belt. After hitting her several times, the woman told Hossain he was hurting her, told him to stop "and began shaking her head and crying," said Karr.

Hossain continued striking the woman — including with his fists, according to an arrest report — and she managed to get one arm, and then another, free. But he then held her arms behind her back and sexually assaulted her as she continued to plead for him to stop, according to Karr.

Hossain's roommate came home soon after the assault and, prosecutors said, Hossain held the door shut to prevent him from entering. The woman then left and told another person what happened, then called police.

Police arrested Hossain later that night in another dorm building in the 700 block of South Halsted Street, according to an arrest report. He was interviewed by UIC detectives and, according to Karr, admitted assaulting the woman and "doing something wrong." He allegedly told police he and the woman were re-enacting scenes from "Fifty Shades of Grey."

Yep, just exactly what was predicted. The irony is that some of the biggest fans of this movie are feminists with liberal political views. Fellow blogger Debbie Schlussel, who reviewed the movie on her blog recently, which Advance Indiana summarized:


Schlussel wonders when the next NFL player busted for domestic violence will use the "Fifty Shades of Grey" defense: "'She asked for it' now has a new meaning because now, in many cases, specifically because this book glamorized it, she did ask for it. Hey, if I were Ray Rice, I’d use that defense and ask my employer why they promote this stuff and yet tell me I’m bad for doing a lot less." I think Debbie best sums it up when she says, "Welcome to American culture in Kartrashian Age." Schlussel gives the movie four Marxes, plus four Betty Friedans plus four ISIS beheadings.

Chicago, here is an interesting story on a Site run by the Chicago Police Department and who knows who else. - http://www.theguardian.com/us-news/2015/feb/24/chicago-police-detain-americans-black-site

In this case art seems to imitate life. (If you want to call a movie like this art.) It is not just Hollywood that is comfortable with sadism, torture and violence. We have found out that our own Government has taken part in torture and brutality. The people that tortured were not just a few "Bad Apples" rather they received their sanctions from the highest levels.

Another form of torture and brutality is this US government's outright lies about its involvement in the Benghazi uprising and the intentional trampling of the civil rights of Nakoula Basseley Nakoula by Barak Obama and Hillary Rodham Clinton. Nakoula is the man jailed and excoriated for absolutely no honest and good reason. He is the man whose anti-Muslim YouTube video was wrongly cited for sparking protests that led to the Benghazi Remember that old hag Hillary Clinton firmly and slowly proclaiming another of her Great Lies: "Make no mistake. The deaths at Benghazi were caused by a YouTube video."

Talk about torture for no real reason by the sanction of the highest levels of US government!

Here is my thought, let's show this guy a movie of someone jumping off a bridge. Maybe he will copy that.