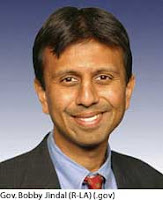 Political columnist Bob Novak is reporting that Sen. John McCain may announce his vice presidential choice this week. According to Novak, the current favorite is former Gov. Mitt Romney. The Fix' Chris Cilizza notes that Sen. McCain is scheduled to travel to New Orleans later this week to meet with Louisiana Gov. Bobby Jindal. The 37-year-old is considered a rising star in the Republican Party. Despite his young age, Democrats could ill-afford to criticize him as unqualified. His resume is much more impressive than Sen. Barack Obama's, the presumptive Democratic nominee. He was elected to Congress the same year Obama was elected to the Senate, and last year he won election as governor. He ran the Louisiana Department of Health under former Gov. Mike Foster. He served as executive director of the National Bipartisan Commission on the Future of Medicare, a 17-member panel charged with devising plans to reform Medicare. He later served as Assistant Secretary of Health and Human Services in the Bush Administration, an appointment which required Senate confirmation. Jindal would become the first Indian-American to land on the national ticket of either party. Piyush is his birth name. He adopted the nickname Bobby after the Bobby Brady character from the "Brady Bunch."

If Democrats can't attack Jindal for his lack of experience, I would expect that Republicans can no longer attack Obama for his middle name or for being a closet Muslim, considering Priyush was born a Hindu and converted to the Catholic religion relatively recently.

Jindal doesn't deny his Hindu heritage. Obama refuses to acknowledge his Muslim heritage. Some criticized Barry Goldwater in 1964 for hiding his family's Jewish heritage. It seems Obama is hiding his religious heritage the same way Goldwater hid his.

"When Senator Barry M. Goldwater ran for the presidency in 1964 there were nationally- syndicated columnists who wrote that the Arizona Republican was hiding the fact that he was Jewish. In GOLDWATER, an autobiography written in 1988, the senator wrote: "Neither my father nor any of our family ever took any part in the Jewish community. We never felt or talked about being half Jewish since my mother took us to the Episcopal church. It was only on entering the power circles of Washington that I was reminded I was a Jew. I never got used to being singled out in that way. My answer was always the same. I'm proud of my ancestors and heritage. I've simply never practiced the Jewish faith or seen myself or our family primarily of the Jewish culture. In the jargon of today's sociologist, we've been assimilated. We're American."

The Senator was raised as an Episcopalian, but his father was Bar Mitzvah, his grandfather was a leader in California Jewish congregations and in Arizona's territorial days before there were temples or rabbis, grandfather Michael was a lay leader in informal Jewish services at high holidays. Columnists could write that the Senator was half-Jewish, but by the matrilineal line of descent in Judaism, Barry is not Jewish because his mother was a practicing Episcopalian."

I think the reason Jindal won't be selected is that 1) his young age only highlights McCain's advanced age (Jindal is 35 years younger than McCain), and 2) it removes Obama's greatest weakness (his relative inexperience) from the table (after all, the VP is the President-in-waiting and that's even more true with McCain).

Obama's campaign on being Muslim:

"To be clear, Senator Obama has never been a Muslim, was not raised a Muslim, and is a committed Christian who attends the United Church of Christ in Chicago."

Fact: Obama was registered as a Muslim in the school he attended in Indonesia at the age of 6. From a New York Times interview Obama gave last year before his candidacy was taken seriously:

“I was a little Jakarta street kid,” he said in a wide-ranging interview in his office (excerpts are on my blog. He once got in trouble for making faces during Koran study classes in his elementary school, but a president is less likely to stereotype Muslims as fanatics — and more likely to be aware of their nationalism — if he once studied the Koran with them.

Mr. Obama recalled the opening lines of the Arabic call to prayer, reciting them with a first-rate accent. In a remark that seemed delightfully uncalculated (it’ll give Alabama voters heart attacks), Mr. Obama described the call to prayer as “one of the prettiest sounds on Earth at sunset.”

Moreover, Mr. Obama’s own grandfather in Kenya was a Muslim. Mr. Obama never met his grandfather and says he isn’t sure if his grandfather’s two wives were simultaneous or consecutive, or even if he was Sunni or Shiite. (O.K., maybe Mr. Obama should just give up on Alabama.)

Our biggest mistake since World War II has been a lack of sensitivity to other people’s nationalism, from Vietnam to Iraq. Perhaps as a result of his background, Mr. Obama has been unusually sensitive to such issues and to the need to project respect rather than arrogance. He has consistently shown great instincts.

How about Obama's executive experience in running his campaign, picking the right strategists, and spending money wisely enough that he has plenty for the General Election.

Also, Bobby Jindal has that crazy exorcism story hanging over his head. I guess if McCain ever starts spitting pea soup, he can really count on his VEEP if Jindal is elected.

Personally, I think Jindal will be a hindrance in that he won't bring a thing to the ticket that a more established candidate like Mitt Romney doesn't. Romney is a great choice for McCain who can bring Michigan into play.

The Catholic Church has officially conducted exorcisms throghout its history. Your comment about "crazy exorcism", Mr. Easter, therefore, could be construed as anti-Catholic. Democrats have increasingly become anti-Catholic because of the Church's anti-abortion position, even though it was once a key constituency for the Democratic Party. I can't say that I'm surprised you pick up on a subject that has been played out extensively on the extremist left blogs. I suppose the Lefties would similarly make fun of a person who claims to have been saved by Jesus Christ. Oh wait, That's Obama's claim. Can't use that one.

If we are going to argue executive experience, Obama and McCain both lose as neither one has held an executive post.

Need we mention that Jindal was served with an ethics violation almost as soon as taking office? Perhaps learning from his mentor John "Keeting 5" McCain?

We're still waiting for the Senate to investigate the Obama/Rezko lot purchase. I guarantee that it will show a violation of Senate ethics rules if the Democrats will permit such an investigation. I'm sure it will be buried because the Democrats already know the answer to that one.

If my comments are construed by anyone as anti-Catholic, please accept my apologies. That was not the intent.

Back to the issue, what exactly does Jindal bring to the ticket that Mitt Romney does not? Romney is known, and has successfully charmed the right after having served as a moderate as Gov. of Massachusettes.

Advance Indiana, you may be waiting for an investigation but no one else is but everyone else realizes that there is nothing there. Also Obama has never hidden his religious heritage. He has from day one admitted that the is a Christian.

Gary, I think you're wrong to label people commenting on Jindal's exorcism story as being "anti-Catholic". Yes, the Catholic Church has been conducting exorcisms officially for centuries. However, such exorcisms occur with an ordained priest and only with the explicit approval of higher church leaders. Reading Jindal's own account, it appears that he and his friends simply staged an exorcism themselves without a priest or church sanction. Apart from the obvious campaign ads that would intercut Jindal with the preacher character from "There Will Be Blood" (with John McCain as Daniel Plainview), Jindal would have an awfully hard time explaining this story to moderate Catholic swing voters (who have been trending Democratic). The uproar over Jindal's exorcism would make people pine for the days of Dan Quayle.

Small-question are you serious? "moderate Catholic swing voters (who have been trending Democratic)" Study some polls and you will see that Catholics used to be a reliable Democrat vote and now they're virtually 50-50. There is not a lot evidence to support your claim that those Catholic voters are now "trending" back to the Democrats.

Flynn..moderate Catholic voters have been trending back to the Democrats because of the current Republican obsessions with war, far-right evangelical Christianity, and a robber-baron attitude towards the poor. Moderate Catholics understand the difference between Church and State and sure as hell don't want to elect any more theocrats like the current chimp we mistakenly call President. Jindal's loony exorcist story would freak out the moderates and independents, and I'm at a loss as to why you don't seem to understand that.

Bring on Jindal...exorcism and all...ethics violatons and all.....your claim that the Dem party is anti Catholic is laughable......WEasnt it McCain who courted a preacher who called the Catholic church the biggest whore in the world.....

Trust me Small Question, as a Catholic of 45 years and a politico almost as long you have no idea what you're talking about when it comes to the Catholic vote.

Long term the trend the polls show without question that Catholics are growing increasingly more Republican. This election there is going to be a trend back to the D's but that's not just among Catholics but among virtually every demographic group across me board.

The issues you mention are not in any way "Catholic" issues. You think Bush's position on welfare is any different from Reagan's? You really think Catholics are up in arms because of a lack of separation of state? What planet are you living on?

White Catholics were a loyal Democratic voting bloc for generations. When the "culture wars" started they started to drift Republican.

Catholics as a whole are still a Democratic group, as almost all Hispanics are Catholic and are a relatively loyal Democratic bloc of voters.

Catholics only break about 60-40 for Democrats today. I'd hardly call them a "Democratic group." Catholics are much more Republican than Hispanics are as a whole.