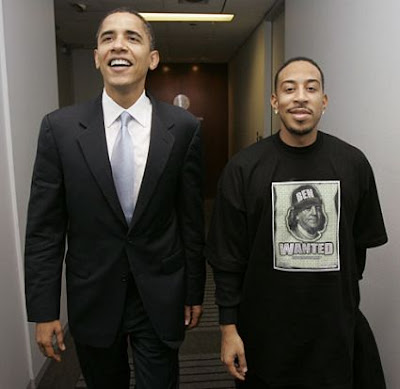 Grammy award-winning rapper Ludacris has a reputation for writing rap songs with sexually-explicit lyrics which promote violence and disrespect for women. He's apparently thought he could boost Sen. Barack Obama's presidential candidacy by writing a rap song about how Sen. Hillary Clinton is an "irrelevant bitch" and how "McCain don't belong in ANY chair unless he's paralyzed." "It's time to get out and vote! paint the White House black and I'm sure that's got 'em terrified." Wow! Yeah, that's going to help Obama out a lot. You can listen to the video by clicking here. Here are the lyrics to Ludacris' latest piece of work (Note how much they bring home the point I made in my previous post):

I'm back on it like I just signed my record dealyeah the best is here, the Bentley Coup paint is dripping wet, it got sex appeal never should have hated you never should've doubted him with a slot in the president's iPod Obama shattered 'em Said I handled his biz and I'm one of his favorite rappers Well give Luda a special pardon if I'm ever in the slammer Better yet put him in office, make me your vice president Hillary hated on you, so that b^$&%* is irrelevant Jesse talking slick and apologizing for what? if you said it then you meant it how you want it have a gut! and all you other politicians trying to hate on my man, watch us win a majority vote in every state on my man you can't stop what's bout to happen, we bout to make history the first black president is destined and it's meant to be the threats ain't fazing us, the nooses or the jokes so get off your ass, black people, it's time to get out and vote! paint the White House black and I'm sure that's got 'em terrified McCain don't belong in ANY chair unless he's paralyzed Yeah I said it cause Bush is mentally handicapped Ball up all of his speeches and I throw em like candy wrap cause what you talking I hear nothing even relevant and you the worst of all 43 presidents get out and vote or the end will be near the world is ready for change because Obama is here! cause Obama is here

Ludacris's rap was certainly in very bad taste but anyone with an I.Q. over 2....will not change their opinion of Obama!!

As long as you're willing to dismiss the fact that Obama has described Ludacris as his favorite rapper who he plays in heavy rotation on his ipod. Oh yeah, he can toss him under the bus with grandma, Rev. Wright, Father Pfleger, et al.

And the issue is? Obama appeals to young African-American males and McCain appeals to??? John Hagee???

Obama is going to divide this country like never before. He is now for reparations:

Thankfully I am like 1/16 Native American, so I should get my check along with everyone else. Here is what Obama wants to give me: "I consistently believe that when it comes to whether it's Native Americans or African-American issues or reparations, the most important thing for the U.S. government to do is not just offer words, but offer deeds."

Wonder what property Obama will give me a deed to?

A song by rap star Ludacris criticising Barack Obama's opponents has been called "outrageously offensive" by the US presidential candidate's campaign.

"Ludacris is a talented individual but he should be ashamed of these lyrics," said Mr Obama's spokesman Bill Burton.

The musician used a misogynistic term to describe Mrs Clinton and urged Mr Obama against appointing her as his running mate, saying that she "hated on you".

Mr McCain, the Republican candidate for the presidency, does not belong in "any chair unless he's paralysed", according to the rapper.

Mr Burton added: "As Barack Obama has said many, many times in the past, rap lyrics today too often perpetuate misogyny, materialism, and degrading images that he doesn't want his daughters or any children exposed to."

The Ludacris song urges black people to cast their votes in the forthcoming election, and lends his support to Mr Obama's bid.

The lyric "the world is ready for change 'cause Obama is here" is repeated throughout the track.

In 2006, before he announced his intention to run for president, the politician met the rapper privately in Chicago to discuss youth issues.

"Ludacris is a talented individual but he should be ashamed of these lyrics," said Mr Obama's spokesman Bill Burton.

.... who is playing the race card again?

I have a feeling it will.

And did you notice that Letterman is now making jokes about Obama??

The worm is turning. Gallup has Obama going from 9 up just five days ago to only 1 up now.

Obama is sounding more and more like a whiny little (Hillary is irrelevant).

I have a response, but it's too long to post here. The short of it....Advance should stick to articles about birth certificates so it looks less desperate to create guilt by assocation.