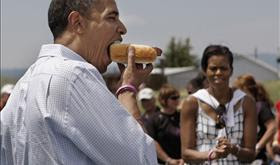 Things can't be good in Obamaland when the Star's most liberal columnist is unhappy with the candidate. Dan Carpenter may just now be figuring out what I've been trying to tell you folks for months. Barack Obama is just another typical Chicago politician. Carpenter recites the flip-flops which are giving him headaches:

Carpenter missed a couple of the big ones, including backing down on his commitment to abide by federal campaign spending limits and the sudden shift in his Iraq policy (who said anything about bringing all the troops home in 18 months?). Look, anyone who writes an auto biography wherein it is impossible to discern where the truth ends and the fiction begins cannot be trusted. Obama is a narcissistic, self-serving politician who will always do what's best for himself. As long as he can count on about half of the American people to select a president the way they choose the American idol, he'll probably become our next president. We can thank the liberals never-ending quest to dumb down Americans for that through our broken education system.

Nice picture. Three issues, thats a lot. How does that compare to John McSame's well over 20 flip-flops. That is someone you should be concerned about. Check this out:

I think after 7 1/2 years of George W. Bush that no republican can accuse the Democrats of dumbing down anything....

Hey, I like that picture - it looks like a brat, and I would have taken Obama to be a veggie-dog-with-organic-sprouts type of guy. Ups his standing with me a bit. Krauthammer's editorial on the 4th regarding Obama's "situational principles" is a must read. By the time we get to November, he'll have 20 flips, too. Only difference is he'll act all self-rightous and indignant when someone calls him on it.

PS tarrandwolley - I'd suggest tinyurl for posting links, Blogger seems schizophrenic as to if they'll display properly. Just a friendly word of advice.

You know I can tell how well Senator Obama is doing by the blog world. All the folks that seem to be on the Republican side of the coin seem to spend more time talking about Obama then McCain. The thing I can never figure out is why you all spend so much time trying to paint Senator Obama as a Democrat. HE IS! You are right he does fall somewhere to the middle or the left of things and not to the right. But then again I think most of the elected R's have forgotten what fiscal conservitism actually is. So why do you all spend so little time talking about Senator McCain and his wife? Is it you think the campaign is doing a great job or can you just not stomach the fact that he is your guy?

Oh in regards to Carpenter...when was the last time he made any sense on any topic?

The bar is already so low you can step on it, thanks to 43. Strategory!

Lance and Tarrandwoolley...the answer to your question is that McCain is no better than Obama.

You make some interesting points...if they were only completely accurate.

There is no shift in Iraq policy. It's been Obama's goal to get the troops out as quickly as possible with a nod to conditions on the ground. He said it throughout the debates and in a 60 mins. interview, too. This is almost exactly what he said. What's wrong with someone "refining" a position? I wish Bush had "refined" his position since it's clear there's no end game in Iraq.

As far as public financing, Obama did drop out of that. He also told the 527 groups to stop. He took a big stand in that he will try to make his campaign responsible for the CAMPAIGN. Today, we are greeted with two new attack ads on Obama from the RNC and a veterans group. McCain continues to take public financing, but he has made no effort to stop the 527s from launching attacks as Obama has done. This justifies one of Obama's reasons for not continuing to take public financing.

jon e. easter is 100% correct. For those willing to listen, different news programs have shown Obama taking the exact same positions several times. In debates last November and last February and several times in speeches and town hall meetings. Obama has always said that conditions on the ground and info from the generals would determine the timetable and he always emphasizes that in no way can any troops be placed in harm's way by a withdrawal plan.

Now if someone wants to talk about McCain's flipflops on taxes, the war, off shore drilling for oil, abortion options, a balanced budget, gay marriages and civil unions, then we can talk for hours. New McCain flip flops are happening on an almost daily basis.

You Obamanauts are just throwing objectivity down the drain on this one. Gone is the definitive 16 month withdrawal timetable for the troops. Essentially, he's going to wait and see what his military advisors tell him under his "refined" Iraq policy.

Well, AI, I appreciate being called a name. All I'm saying is that Obama has been consistent that the 16 month timetable is and has been contingent on the conditions on the ground, sir. It's a consistent position. There is no flip flop.

I understand that perhaps you were too busy tearing down André Carson to watch the debates earlier this year, but these are the facts about Obama's position.

Obama's own website says he will bring the troops home in 16 months, at a pace of a brigade or two per month. I quote from the above page:

"Bringing Our Troops Home
Obama will immediately begin to remove our troops from Iraq. He will remove one to two combat brigades each month, and have all of our combat brigades out of Iraq within 16 months."

That's a dumb idea, only becuase you should NEVER lock yourself into a timetable like that. But, a year ago, he had netroots to win over, and they wanted a date they could circle on their calendars. Now, with the primary wrapped up, he's doing what any responsible President would do (what McCain is doing, and what W finally started doing a year ago) and listen to the guys on the ground, and not commit yourself while strill striving towards a particular goal. Don't say the position hasn't changed, because that is false: his position went from a fixed timetable to no timetable at all. Try to hijack things and point the mirror at McCain if you will. It does not change Obama's reversal on this key facet of his primary campaign.