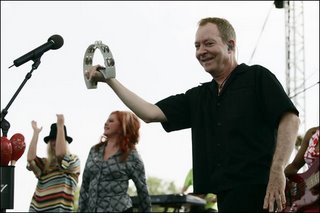 While it is technically Memorial Day weekend, for Hoosiers it is race weekend with the running of the Indianapolis 500. The racing weekend activities kicked off yesterday with Carb Day at the track. The B-52s and Third Eye Blind performed at an infield concert as part of the Carb Day events, and the size of the crowd was impressive. Moving Carb Day from its traditional day on the Thursday before the race to the Friday before the race appears to have paid off.

A fun part of the weekend for locals is spying out-of-town celebrities in town for the race weekend. Some celebrities prefer the night life Indy's gay community has to offer. And the B-52s Fred Schneider, shown above in a photo from today's Star, is no exception. He was spotted alone last night at Greg's Our Place, Indy's hottest and oldest gay club.

The 500 Festival Parade is scheduled to kick off in a couple of hours. It will feature several celebrities, including bicycling champ Lance Armstrong, Lost's Jorge Garcia, actor Luke Perry, singer Richard Marx and Harry Wayne Casey of KC and the Sunshine Band. Of course, the old stand-bys Florence Henderson and Jim Nabors will be there as well.
Posted by Gary R. Welsh at 8:04 AM