No Prom For Dress-Wearing Male Student In Hobart 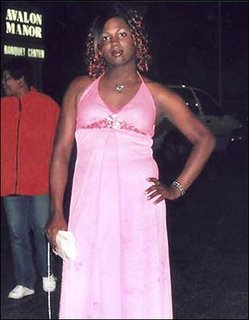 He's worn women's clothing to school throughout the school year, but when 18-year Kevin Logan showed up at Gary, Indiana's West Side High School's prom at Avalon Manor in Hobart wearing a pink, slinky fuschia gown and heels, school officials turned him away, even though they allowed at least one female student to wear a tux to the prom.

I have no formal pictures, no memories, nothing. You only have one prom," he told the AP. Logan, who is gay, received an $85 refund for his prom ticket Tuesday but was not satisfied. The AP says he is considering filing a complaint with the Indiana Civil Liberties Union.

"All students have First Amendment rights of freedom of expression. Those rights can be overcome for the legitimate needs of the school. For example, you can't protest. That runs the risk of disrupting instruction," Falk said. "But the court found at a prom, those risks are lessened. It's not a scholastic activity."

The article says Kevin is gay, but I think it would be more appropriate to characterize him as being transgender. But he apparently says he's gay. It's just that most gay men don't have an urge to dress up as a woman--at least every day.
Posted by Gary R. Welsh at 4:04 PM

She or he looks better than half of the girls at my prom.

Although West Side HS apparently held their prom at Avalon Manor (which is in Hobart) the high school is in Gary. You might want to correct that.

Thanks for the correction Morgan-duly noted.

I'm just reminded that Kevin's experience is a little similar to that scene from the movie "Camp" where the gay guy showed up at his prom in a dress and not only got turned away but beaten up by a group of guys. At least Kevin didn't get beaten up.