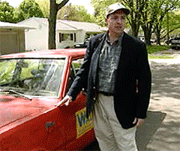 LONGEST SERVING PRESIDENT PRO TEM IN INDIANA HISTORY IS NOW HISTORY
Senate President Pro Tem Robert Garton (R-Columbus), first elected to the Senate in 1970, has been defeated by a political unknown, Greg Walker. The Columbus accountant lambasted the 36-year veteran and longest serving President Pro Tem in Indiana history for creating and protecting a health insurance for life legislative perk for lawmakers. The issue played the same way it did in Brent Waltz' (R) upset race two years ago over the long-time powerful Senate Finance Committee Chairman Lawrence Borst with deadly results for the incumbent.

In both the Garton and Borst races, voters in Johnson County played a critical role in the defeat of the powerful incumbents. While Garton ran slightly behind Walker in his home county of Bartholomew, Walker maintained a strong enough lead in Johnson County to lock up a win, causing Garton to concede a short while ago.

Walker's win tonight is certain to move the leadership of the Senate further to the right. Former Sen. Dick Thompson, an extremist conservative, is locked in a tight 3-way race with Phil Boots and James Detamore, with Boots on top slightly. Boots appears to have won by a few hundred votes. A win by Thompson would have moved an increasingly conservative caucus dangerously further to the right. Sen. Allen Paul (R) narrowly holds on to his Senate seat after a close one tonight.

Walker's win tonight in no way insures his victory in November. Although the district favors Republicans, Walker will face a very well-respected Columbus attorney, Terry Coriden in the fall. Democrats will no doubt be pouring a lot of resources into this race.

Support for Gov. Daniels' Major Moves appears to have claimed at least one victim tonight. Rep. Mary Kay Budak has been crushed by Tom Dermody, who collected nearly 70% of the vote. Gov. Daniels campaigned for Budak's re-election to no avail. Rep. Don Lehe ekes out a win over challenger Art Anderson. Support of daylight savings time nearly claimed the seat of Rep. Rich McClain. He holds off Rich Eller with 55% of the vote. Rep. Phyllis Pond has beaten back Denny Worman, capturing more than 60% of the vote. Rep. Suzanne Crouch also easily defeated anti-abortion extremist Jon Fulton. Rep. Mike Murpy pulled about 60% of the vote to win over his 2 primary opponents in Marion Co.

While several GOP incumbents had a rough go in today's primary, legislative Democrats appear to have escaped defeat, except for Rep. Colleen Bottorf, who has held her late husband's seat since he died late last year. Sen. Karen Talian easily holds off a challenge from Larry Chubb. Phil GiaQuinta holds on to the House seat he will inherit from his father despite a strong challenge from Geoff Paddock. Rep. Linda Lawson held off a challenge by former Rep. Ron Tabaczynski.
Posted by Gary R. Welsh at 8:29 PM

If you had known then what you know now- Garton loses primary to yet another GOP wingnut- would AI still have taken part in bring Garton down via inciting its readers wrath over the lifetime health care benefit?

Not at all. Garton said himself in conceding; he lost because of his own actions, not because of the failure of his supporters or the other candidate. If he didn't grasp that issue after Borst's lost 2 years, then he has no one but himself to blame.

Garton's tenure as Senate President Pro Tem was over, whether at the hand of the voters or at the hand of his own caucus. He has barely held on to his leadership position the last couple go-arounds and the addition of more conservative members to the caucus made it highly unlikely he could hold on to it, win or lose the election. The only way he could hold on to the power was to give in to the whackos just like he did with the marriage amendment and various other nutwing ideas from Eric Miller and Micah Clark. I believe Terry Corriden, the Democratic candidate, will have a good chance at winning this seat. As long as Walker keeps trotting out ideas like public floggings as an acceptable form of punishment, he should have no problem marginalizing Walker.