So Was It The Hurricane Or The Grant? 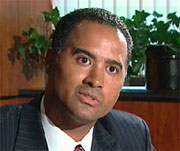 In an interview with WTHR-TV's Roger Harvey, Michael McKenna defends his role in the awarding of a $417,000 grant to his newly-formed company, McKenna Consulting, LLC by his friend's wife, Heather Bolejack, former executive director of the Indiana Criminal Justice Institute. Based on the questioning of Harvey, it appears McKenna's story is that he decided to move up to Indianapolis to be with his friends Bolejack and her husband, Corey Smith, after Hurricane Katrina hit New Orleans, where he lived. Harvey says:

You moved up here after being displaced from a hurricane to be with your best friend and his wife who happens to be the head of the Criminal Justice Institute, which approves a grant for more than $400,000. Do you see where people would say, 'Wait a minute. That doesn't seem right'?" Eyewitness News asked McKenna.

But what about those Secretary of State records which show that McKenna Consulting, LLC was actually formed on August 2, 2005? Hurricane Katrina hit New Orleans and the Gulf Coast on August 29, 2005, weeks after McKenna legally established his company in Indiana. Does McKenna not want us to know that he moved up here specifically for the grant?

McKenna reassures Harvey, "I maintain I have done nothing wrong and have nothing to hide. I played by the rules that I was always told. Work hard and do the right thing." So why does McKenna find himself in this mess? "I believe that politics always has been and always will be a dirty business and to deny its role in this investigation is frankly laughable," McKenna said.

McKenna is right about politics being a dirty business. How else could a guy wander up here from New Orleans and take home a $417,000 grant from a state in which he had never lived prior to Hurricane Katrina (or perhaps a few weeks prior to that). He must think he knows something us idiot Hoosiers haven't yet figured out.
Posted by Gary R. Welsh at 8:45 PM

Given Mitch's wide-ranging definition of "Indiana business" for purposes of his Buy Indiana program, it all seems quite appropriate.

Actually, the 'borrowing' was done by Randolph and the name is used (as I understand it) in other states. Wake up guys...this program/type of program exists across the country!

Again another 'big story' NOT!