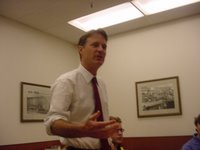 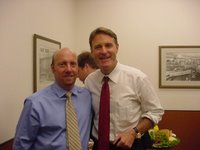 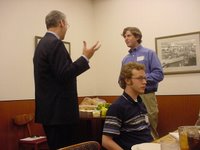 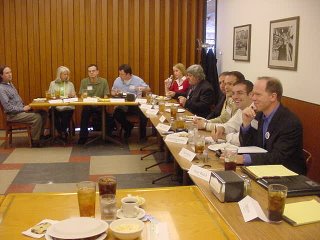 Advance Indiana editor Gary R. Welsh and a dozen other Indiana bloggers had a rare opportunity to sit down with Sen. Evan Bayh (D), a contender for the 2008 Democratic presidential nomination, over lunch at Shapiro's Deli in downtown Indianapolis and discuss issues on the minds of bloggers. In a very relaxed setting, Sen. Bayh answered questions on a broad range of topics, including the war in Iraq, NSA wiretapping, constitutional bans on gay marriages, his record as Indiana governor and, on a more personal note, his twin sons, Beau and Nicholas.

This event reflects the growing influence bloggers have in the political process and how politicians, like Sen. Bayh, are learning to use them to reach out in a more direct way to communicate their views to voters who feel left out of the process. Many active blog sites were represented today, including In The Agora, Bilerico, Indiana Barrister, Left of Centrist, Taking Down Words, Fort Wayne Observed, Indiana Blog Review, Indiana Progressives, and Shakespeare's Sister among others.

I think it is fair to say that the bloggers present were impressed that Sen. Bayh took the time to meet with us. Bloggers were free to ask the questions they had for a little more than an hour. It was a very polite and collegial atmosphere throughout the luncheon. Sen. Bayh's staff should be commended for their good work in putting on today's event.

I've posted several photos from today's event. AI editor Gary R. Welsh is shown in the second photo with Sen. Bayh. Bloggers Mitch Harper and Zach Wendling can be seen talking in the third photo. The last photo shows most of the bloggers in attendance for today's luncheon.

AI will have more on today's luncheon with Sen. Bayh in a later post.
Posted by Gary R. Welsh at 3:42 PM

Thanks for the photos. It's always nice to see what folks look like. Consider it a compliment that you were invited. I wish I could have been there but my schedule was just to full. Keep up the great work here.

Good job I am glad to see the senator was open to inviting bloggers from all walks of life. I hope the senator unstands the importance all you bloggers do infoming us on important issues. Keep up the good work.