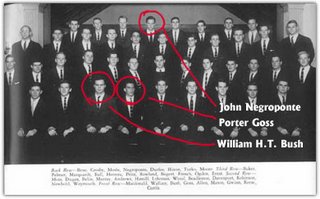 First, it was Peter Goss who was forced out. Now, the number 3 guy at the CIA, Kyle Foggo , has been forced out. Both Goss and Foggo have been linked to the Hookergate scandal unfolding as a result of former Rep. Duke Cunningham's bribery conviction. If that's not bad enough, President Bush's choice to replace Goss, Gen. Michael Hayden, has now been linked to a top executive of the defense contractor who stands accused of bribing Rep. Cunningham.

Falling into the "it's a small world" category, the photo above was featured on Talking Points Memo. It is a 1960 Yale photo of the Psi Upsilon fraternity, showing Bush's Uncle "Bucky" Bush sitting next to Porter Goss, with John Negroponte standing in the back row. Do you suppose they were all members of the secretive Skull and Bones Society at Yale also, which seems to be a prerequisite to service in the American intelligence community?
Posted by Gary R. Welsh at 8:45 PM