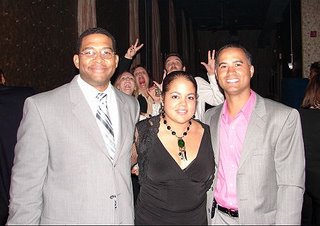 As Inspector General David Thomas was reviewing his investigation of the Indiana Criminal Justice Institute with Gov. Mitch Daniels, Corey Smith, Heather Bolejack and Michael McKenna were spied by IndyStar's Party Crasher having a grand ole time together at the grand opening of Sushi On The Rocks last night.

Smith, Bolejack and McKenna may not be seen partying in public any time soon after the IG's report is handed to the Board of Trustees at its closed-door meeting this afternoon. Gov. Daniels has already concluded he doesn't like what Thomas had to tell him yesterday. He's recommending that the Board fire its executive director, Bolejack, along with her chief deputy, Katalina Gullans.

“The inspector general briefed the governor Thursday afternoon, and the governor immediately recommended these terminations. At a minimum, evidence suggests unacceptable misconduct and poor judgment. Whether any actions are more serious is a matter for prosecutors to decide,” said Mark Massa, the governor’s general counsel, said in a news release. Thomas plans to turn the evidence he's gathered over to federal and state prosecutors for possible criminal action.

One matter likely to draw close scrutiny by prosecutors is the $417,000 contract Bolejack awarded to McKenna, which has since been suspended after McKenna was paid $80,000.

UPDATE: WTHR-TV is reporting this evening that the Board of Trustees just concluded a meeting at which Bolejack and Gullans were fired by a vote of 10-1. A visibly shaken Bolejack told reporters she "would never knowingly or intentionally circumvent the rules", and that she looked forward to the day when she could tell her side of the story. WTHR-TV also reported that the Board is asking Bolejack and Gullans to reimburse ICJR for unspecified expenditures. Both WTHR-TV and WISH-TV featured the photo above taken by INTake at last night's party. AI was the first to report on the INTake photo. The staff of INTake apparently didn't make the connection between the persons in the photo and the breaking news about the investigation when they posted the photo up on the Internet this morning, which would have added an extra twist to the Star's reporting on the story.
Posted by Gary R. Welsh at 10:11 AM

This is too funny to be true. Great catch Gary! Taking Down Words is claiming an exclusive on it, but I see your post is time-stamped before their post so that would make it not so exclusive.

She's guilty of bad judgment for sure if nothing else.

That's a good question. None of the reports I've seen indicate who the dissenting vote on the Board was.

I saw a newscast last night (can't remember which one) that mentioned Larry Landis' name as the sole dissenter. The motion to recoup the funds from the SKIP loan, however, received unanimous approval from the board.

Thanks anonymous. Larry is the executive director of the Indiana Public Defender's Council so he serves in a role similar to what was Heather's role. There could be a friendship there. The Board includes several persons with law enforcement background, including police officers, sheriffs and prosecutors. Attorney General Steve Carter sits on the Board as well. Note that the executive director of the Allen Co. NAACP, Rev. Michael Latham, also sits on the Board.

Think that Carter's first appearance at a board meeting was when Bolejack was fired...or at least let me put it this way - he wasn't a regular.

1)Landis isn't a rubber stamp
2)Saw the 'evidence' was not, by any means, conclusive
3)Believes in due process and justice