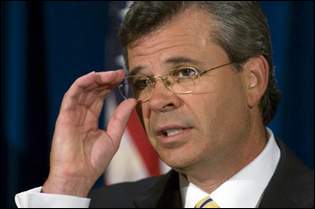 Gov. Ernie Fletcher (R) has been indicted by a grand jury on misdemeanor charges of conspiracy, official misconduct and violating the prohibition against political discrimination. Fletcher began passing out pardons to a variety of persons who served in his administration and who were facing criminal charges for politicizing state personnel decisions. Ironically, those people won't be able to plead the 5th to avoid testifying against Fletcher.

Fletcher made news awhile back when he axed the state's EEO policy which prohibited discrimination against state employees on the basis of their sexual orientation or gender identity. Apparently, Fletcher thinks partisan Republicans are entitled to "special rights" when it comes to the awarding of state jobs, while gays aren't even entitled to equal rights.
Posted by Gary R. Welsh at 4:38 PM