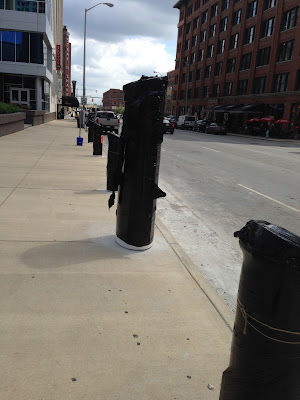 The brazen abuse of power by Mayor Greg Ballard knows no bounds. He continues to appropriate valuable public parking for the exclusive use of the French-owned company with which he entered into a backroom deal to operate their Blue Indy electric car sharing program. In the photo above furnished to us by an observant reader, you see more spaces taken along South Pennsylvania adjacent to Scotty's Brewhouse Pub. IPL is charging Indianapolis ratepayers millions of dollars for infrastructure improvements to support the private company's car charging stations, and Mayor Ballard stole over $6 million from the downtown TIF slush fund to pay for the illegal charging stations that are being installed all over the city at sites where he is illegally converting some of the most valuable public parking areas for Blue Indy's exclusive use. Don't expect the Gannett-owned Indianapolis Star to do any investigative reporting on this major public corruption scandal. Their reporters have been chastising officials raising concerns about Blue Indy, telling them it's a great, innovative program, and it doesn't matter if Mayor Ballard is breaking the law. In their world, they believe he should have authority to do what he's doing even if the law doesn't permit him to do what he's doing. Anyone with tips on who all is benefiting from the Mayor's latest kickback scheme, please send them our way. Yeah, I know about how the Indianapolis Star is benefiting from it already.

Below is a list of all of the currently-planned location, demonstrating the value of the hundreds of public parking spaces Ballard has stolen from the public to give to the French-owned company for their exclusive for-profit use.

According to a July 14, 2015 Wall Street Journal article under the headline Former Harrisburg Mayor Charged with Theft:

The former mayor of Harrisburg, Pa., was charged Tuesday with dozens of counts for allegedly using city money to fund obsessive buying sprees of artifacts that helped plunge the state capital into debt, the state’s attorney general said.

The charges against Mr. Reed stem from an investigation into the financing of the city’s debt-ridden incinerator project, according to a grand-jury report released by Ms. Kane on Tuesday.

The incinerator, which was supposed to generate electricity and revenue for the city, instead saddled it with $300 million in debt through a series of bonds and loans. Prosecutors alleged that Mr. Reed diverted money from those deals to fund what became an addiction to acquiring objects ranging from the Civil War and Wild West to sports memorabilia for museums that he planned....

So, how do we get Attorney General Zoeller to go after Mayor Ballard?

So why hasn't an indictment been issued? -This appears to be a clear case of felony Official Misconduct.

IC 35-44.1-1-1
Official misconduct
Sec. 1. "A public servant who knowingly or intentionally:
(1) commits an offense in the performance of the public
servant's official duties; Commits a Class 6 Felony."

Will you all do me a favor? when you see the candidates for Mayor of Indianapolis ask them what their views are on Blue Indy, please record it to watch them squirm!

People need to be asking the two Democratic prosecutors, Joe Hogsett and Terry Curry, why they cut a deal to cover up all of this corruption. Apparently switching the mayor's office from Republican to Democrat is their end game. They're not concerned about public corruption as long as they get their fair share of it.

I have long felt here in Marion County we have a Republicrat Party. The shadow government of Crony-Capitalists provides the Agenda and their Elected Puppets follow that Agenda. The political parties may squabble over the spoils, but both parties are parasites.

Unfreakin' believable that Democrat Maggie Smith's ineffective, grandstanding group of Council politicos are doing nothing substantial other than for-show media ops in Greg Ballard's criminal, law-breaking Blue Indy actions (among others). How the hell this City can ticket citizens or arrest petty lawbreakers or even murder suspects when the higher-up elected persons like thief and liar Greg Ballard are allowed to roam free unfettered by fear of arrest is the perfect storm for street level civil disobedience. Why should everyday citizens be forced to obey "laws" when bullheaded jerks like Greg Ballard can break whatever the freak law they want without fear of criminal prosecution?

The Democrat mayoral candidate proves he earned the label "Lying Joe Hogsett": he had to intentionally refuse to address the corruption of ex-soldier Greg Ballard when everyone else can see it plain as day; and as for Terry Curry, puh-leeze.. like Lyin Joe Hogsett, Terry is another old white Democrat male who also refuses to address the public safety issue of a possibly psychologically challenged misanthrope I now have to assume could describe Ballard.

We no longer have a "Mayor", we have a Dictator. The Council is the Roman Senate so out of touch and worried about its own fortunes while allowing the City to "burn" outside its Chambers.

What happens when drivers of privately owned electric cars need to charge up? We are seeing more and more electric vehicles, privately owned, like the Nissan leaf and the Tesla, and I know Toyota and other car companies are ramping up production of affordable electric cars for sale to the public; cars which also require charging stations. These Blueindy charging stations might seem acceptable to me if any private citizen can drive their personal electric car in and charge up. But if the charging stations are proprietary and strictly limited to the charging of blueindy car share cars, that to me seems like a taking of public resources. After all, we all pay taxes. Now that Mayor Ballard has appropriated these valuable spaces, shouldn’t they be required to be made available to any electric car that happens by and needs a charge. I can foresee the day when someone needing a charge can’t find one, even while driving past potentially hundreds of charging stations inappropriately dedicated to Blueindy car sharing cars only. If I were on the city county council, I would seriously think about mandating universal access to the charging stations. In Savannah Georgia the problem is that they have trouble keeping regular citizens with gas engine cars from parking in the dedicated charging spaces because they are, after all, the good spaces. So the council might also want to consider legislation prohibiting the ticketing of the citizenry for parking in Blueindy spots, or alternatively, the council might want to install signs permitting 20 min parking in Blueindy charging spots for gas engine vehicles, giving everyone fair access. But in a world where the average owner of an electric car is struggling to find charging stations, why shouldn’t they have access to all these publicly funded stations on the same priority basis as Blueindy cars. I think the council has options. And to Anon 6:41, I'm particularly thankful that you don't run anything in government, because your opinions are juvenile and badly written. Don't go away mad. Just go away.

Good points, anon. 7:54. I for the life of me do not understand why a lawsuit has not been filed by the council to block the mayor from doing what he's doing. The Blue Indy contract was not competitively bid. What he has done is given a rent-free lease of the most valuable publicly-owned parking spaces in the city, along with millions of public dollars to a private company. He cannot do this under the state's procurement laws. It's not even a debatable point. It's like I'm living in a parallel universe. In what world does the media stand by and glorify a multi-million dollar theft of public assets by a corrupt elected official who may be receiving something in exchange for this heist for all we know. There is nothing like this happening anywhere in America. Where is Greg Zoeller's office. Remember how he brought the federal civil RICO action against the former East Chicago mayor for his sidewalks for votes public theft? Oh wait, no, he can't do that. It might hamper his ability to raise campaign dough for his congressional campaign. There is no other state in America as crooked as Indiana. There is no rule of law. The entire system has broken down. People should have no respect for our government because the crooks we've entrusted with administering our laws have no respect for us.

The Council is complicit in this wrongdoing. They evidently have not instructed their attorney to push to get a hearing on their Vision Fleet lawsuit. I know justice is blind but that shouldn't include the US Attorney, the AG and Curry who are supposed to be looking out for us. As for Hogsett, he wouldn't go after Brizzi even when he had a cooperating witness.

As with so many scary ideas that are tried here before being inflicted the rest of the country, Indy is being used as a test bed for these electric cars.

The powers know they can do whatever they want in Indy, because there is absolutely no oversight or criticism.

I wonder what the end game is? They're trying to reform some perception. Don't come into a city center unless you have an electric car?

The conclusion I draw from 7:54 is not that he or she minds so much that government is overstepping its proper municipal role but that taxpayer dollars and subsidization by IPL rate payers who will never own or use an "electric car" is just find and dandy with him/her. I'd rather see 6:41 in "government" than another person who desires a free-rider effect at the expense of others.