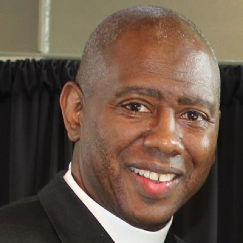 ﻿﻿﻿﻿
When Rev. Charles Harrison's name popped up late last year as a potential candidate for Indianapolis mayor, it was clear for all to see those behind the push to put him on the ballot as a third party candidate for mayor were Republicans who know their novice candidate imported from Chicago just a few short years ago, businessman Chuck Brewer, had no chance of defeating Democrat Joe Hogsett in a head-to-head match-up. Harrison was game for the third party bid until his old friend, Deputy Mayor Olgen Williams, expressed interest in challenging Brewer for the Republican nomination. Rev. Harrison eventually bowed out of the race after forming an exploratory committee. As it turned out, Williams' candidacy was very short-lived following a quick trip to the woodshed with his boss, Mayor Ballard.

What was very peculiar about Rev. Harrison's earlier aborted campaign for mayor were the discussions of him running as the Libertarian candidate despite him having no political leanings at all in the direction of what Libertarians supposedly represent. There was also a lot of talk of a very wealthy, mystery California businessman willing to invest $2 million into Rev. Harrison's campaign. I'll leave it to others to speculate why this mystery businessman would be willing to invest that much money in a little-known minister's campaign half-way across the country from his home state. For whatever reason, the Libertarians have fielded very few candidates for office in this year's municipal election, including the mayor's race. To the outrage of conservative Republicans and some Libertarians, the party at the behest of the Marion Co. Republican Party fielded a candidate in the Third District City-County Council race as part of Kyle Walker and his corrupt leadership team's effort to ensure that the most principled incumbent Republican council member, Christine Scales, loses her race for re-election.

As news came the Libertarians were not fielding a candidate for mayor, someone hired a California-based firm with ties to the Republican Party, Star Petition Group, to circulate petitions to collect enough signatures to place Rev. Harrison's name on this year's municipal ballot as an independent candidate. A paid mouthpiece for the local Republican Party, Abdul-Hakim Shabazz, was fast to announce enough signatures had been collected to place Harrison's name on the ballot should he file a statement of candidacy with the Marion Co. Board of Elections by July 15. Incredibly, Rev. Harrison tells the Indianapolis Star he has no idea who is behind the effort to put his name on the ballot, which includes a website, RunRevRun.com. Whoever registered the domain address for the website chose an Arizona company, Domains by Proxy, which registers names on behalf of clients who wish to keep their identities secret.

It's difficult to imagine someone would waste money to pay an out-of-state firm to gather signatures to place Rev. Harrison's name on the ballot unless the would-be candidate knew of the effort and approved of their actions. It's also quite apparent the local Republican Party is behind the effort to get Rev. Harrison's name on the ballot. This is typical of their cynical view towards black voters and how they believe they can be easily manipulated to switch their allegiance to the Democratic Party simply by fielding a person of color to run against a white Democratic candidate. Clearly, local Republicans believe Rev. Harrison will siphon enough black votes from Hogsett to allow Brewer to win with a minority, plurality vote. It never works for them, but it's a tool they repeatedly reach for in their trick bag in election after election. Their greater problem is with independent and some Republican voters, who have no intention of voting for this unknown, untested man who spends half of his time in Chicago with his son. Brewer is also still an active reserve officer in the U.S. Marines, who could get called up for active duty service on short notice and be out-of-pocket for an extended period of time just like has occurred with South Bend Mayor Pete Buttigieg, who was called up for a six-month tour of duty this past year in Afghanistan. That's unacceptable for a city the size of Indianapolis, which requires a full-time mayor who is fully-engaged in our community. Chuck Brewer is not that candidate.
Posted by Gary R. Welsh at 10:12 PM

There are a lot of angry Libertarian voters in Marion County who are angry that the LP is not fielding a candidate for Indianapolis Mayor this year! Also why the LP allows Abdul anywhere near them is a mystery and annoyance to honest, thoughtful libertarians throughout the state! That may explain why the Indiana Libertarian Party is bleeding members!

MCRCC would be better off trying to pull the old Chicago trick - find someone else named "Joseph Hogsett" and put him on the ballot. But it all makes sense. Why would Joe Hogsett spend money on TV ads which started since the day after primary when everything indicates you have no relevant opposition? Is Hogsett's camp afraid the Dems will forget to show up like they did in 2007? Hardly. I know the old adage "Campaign like you're always behind in the polls" but straight up this is not going to be even close just based on recent election results. GOP is down on average 20% with lever pullers, and countywide races have gone anywhere from 55-45 to 60-40 in the past couple of elections.

Locally, the Libertarians are nothing more than a social club of people who like hanging out together to smoke, drink and play games with local elections at the margins. They get an extra high whenever they succeed in playing the role of spoiler in an election. Their fascination in promoting the twisted cult of personality known as Bill Levin is the latest example of what they're really all about.

Indianapolis dirty tricks are pretty standard fare, even by national standards. In Virginia a phony Board of Elections flier was circulating the state "advising Republicans to vote on Nov. 4 and Democrats on Nov. 5." Voting, of course, was on the 4th only, creating fear among neutral observers and the Obama campaign that people were simply going to miss the opportunity to go to the polls.
And an anonymous flier was circulating in predominantly African-American neighborhoods in Philadelphia telling voters they could be arrested at the polls if they show up to vote with outstanding arrest warrants or unpaid parking tickets. This was also untrue.

Voter caging is the process of sending mail to the addresses of registered voters with the intent of challenging their votes if the mail goes undelivered and the voter still shows up at the polls. It still happens, but the most famous instance occurred in 1981, when Republicans sent thousands of letters to black and Latino voters in New Jersey, hoping to block as many as possible of these likely Democratic voters from voting. As a result of that stunt, the Republican National Committee entered into a consent decree with the Democratic National Committee agreeing not to engage in voter caging unless a court says it's okay. They leave it to third-party conservative groups now.

An anti-gay white bigot pretended to be black to win a local election in Houston.
Dave Wilson, who in 2009 distributed homophobic fliers when then out Controller Annise Parker was running to be mayor of the fourth largest city in the US, is now a member of the Houston Community College Board of Trustees.
He beat out incumbent Bruce Austin, who is African-American, in a predominately black district. The margin of victory was 26 votes.
He sent out campaign ads filled with black people, admitting the pictures used were pulled from websites.
A second flier said Wilson was endorsed by Ron Wilson, the name of an African-American politician who was a  state representative. Only in the fine print, would voters discover that ‘Ron Wilson’ was actually Wilson’s cousin. The relative lives in Iowa.
Wilson stood by his fraud.
‘Every time a politician talks, he’s out there deceiving voters,’ he said to KHOU.com.
The anti-Parker ad Wilson sent to voters said the following:
‘I have nothing but compassion, respect, and sensitivity towards those trapped in homosexual behavior. I have family members and friends who have been ensnarled in this behavior, and I know something of the incredible pain and sorrow it has brought to them and their families.’

What came to me as I read commentary by Anon 8:05- "Racial identity theft" is the result of the extremist left liberal insistence that we Americans all must be "equal" in order to have a "fair" society. Extremist leftist liberal thought permeated American society to the point "minority action" consists of special treatment when it comes to job selection and salary rates. Is it a wonder any person just might begin to "identify" as being of a race or nationality other then their birth race? The unintended consequences of the Utopian masterminds again come home to roost. How can any liberal fault Rachel Dolezal (not that I agree with her methods)-or anyone else for that matter- when Dolezal says that because she identifies with being Black she is Black? Dolezal is simply following the illogical conclusions of the loons who make up the American left. As the leftists chop and dice us into "groups" and "blocs" and "minorities" we are effectively made chattel of the State- and with less civil rights- pulling at State's skirts hems like whinning little children screaming that this sib or that sib "got more" than "we got".

Now, regarding local politics and Mr. Harrison: As an active Marion County GOP, Welsh is right. The fools at the top of the MCRCC- and those corrupt hatchet attorneys who wield vast influence because of the judges [yes, judges] and career tool politicos they have in place- know their man Brewer's chances of actually becoming mayor are less than being able to drink from a cool gently running stream in Hell. Corrupt vengeful attorneys like DB utilize hate postcard campaigns, multiple candidates to siphon votes, and "street corner" whisper campaigns to smear anyone they know they cannot buy off for future political favors.

Marion County voters currently do not have a mayoral candidate who deserves our votes and I am tired of voting - and will no longer vote- for the lesser of two poor choices.

The idea of "equality" laughably assumes the notion of a politically biased arbiter. It's not about equality, it's about special privilege for elite scam artists. Unlike gravity; identity politics promote an illusion or notion of equality, that's not intended for all, only a few.