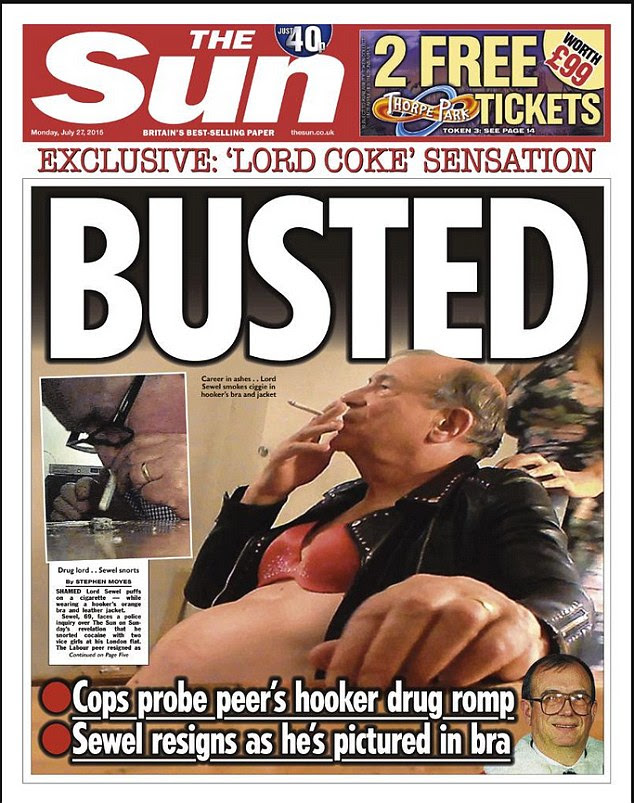 The deputy speaker and chairman of the upper house of British parliament, who also chaired the committee governing ethics standards in the House of Lords, has been caught on video having a sex romp with two female prostitutes while snorting cocaine and wearing a woman's bra. Baron John Sewel, a 69-year old married father of four, told his female companions, "I just want to be led astray." Sewel resigned his leadership position following the damaging revelations and has been suspended from the Labor Party but is said to be resisting calls to resign from the House of Lords. Sewel told the prostitutes there was a "real problem" with members of parliament sleeping with boys. Ironically, Sewell's sex and drug romp took place in a flat located in Dolphin Square, the same building where MPs have been accused of sexually abusing children as part of a VIP pedophile ring. It's too bad the media in this country won't report on similar issues with America's leaders. Apparently you're ineligible for service in Congress unless there are some dark secrets in your life that can be used to blackmail you.
Posted by Gary R. Welsh at 7:20 AM

No truer words... "...Apparently you're ineligible for service in Congress unless there are some dark secrets in your life that can be used to blackmail you." I couldn't help smirking when I read Lord John Sewel's remark that there is a "real problem" with members of Parliament sleeping with boys; your recent, remarkably timely article came to mind- let the disbelievers and claimers of "vast conspiracies" now disabuse these truth.

I also think back to the proved perverted, female sexual predators like left liberal Democrats Ted Kennedy, Frank Dodd, Bob Menendez, and Bill Clinton; these are people who truly do wage a "war on women" by their known disrespect for women and using them purely for sexual objects and pleasure. Association with some of the forenamed may even cause death... but perhaps persons like Mary Jo Kopechne's Life Do Not Matter...

Locally, states wide, and in both houses of the Congress, the "so-called elite" politicos are not fit to wash the feet of the everyday Americans who pay these corrupt politicians and judges and corruptocrats their way-too-generous salaries.

I'm to the point of thinking one can't enter politics unless the satanists/intelligence agencies have dirt on you and own you outright. Those who play their game and later decide to rebel against the nwo get exposed or suicided.

Field McConnell and David Hawkins chronicle daily at abeldanger.net how the "switched key", "honey pots" and "pedophile entrapment" are all arsenals in active use by the people who control government's worldwide from the shadows. The privatization of key elements of the intelligence apparatus has taken it to all new levels. Our local federal prosecutors withheld from you the underlying blackmail schemes Ponzi schemer Tim Durham had in place. The drug-fueled sex orgies he hosted at his Geist mansion were captured on CCTV for future use to control the numerous lawmakers, judges, prosecutors, law enforcement and business leaders who participated in them. Where and who possesses those illicit video recordings is as intriguing as the prominent elites, including former President Bill Clinton captured on tape having sex with underage girls at the billionaire pedophile Jeffrey Epstein's many homes, yachts and private jets. Their existence is why Carl Brizzi was never brought to justice by federal prosecutors for the multiple felonies he committed as Marion Co. prosecutor.