Mayor Greg Ballard is determined to continue to roll out a fleet of more than 400 electric and hybrid automobiles the City of Indianapolis acquired under an illegal lease his administration entered into with Vision Fleet, the unknown, untested company with nothing behind it other than political clout. Advance Indiana has now learned an emergency alert went out to city workers driving the cars to stop re-charging them at their homes as they had been told to do.

The alert went out after electrical outlets at the homes of two IMPD officers melted. It turns out the cars can only be plugged into outlets with a dedicated circuit in order to avoid electrical hazards and fires. Advance Indiana hears that Ballard, upon hearing this news and despite a lawsuit filed by the City-County Council to void the contract, ordered 23 more electrical cars from Vision Fleet for the department.

It's not just the city fleet having difficulty with electric vehicles. An IndyGo rider contacted Advance Indiana to complain about one of the handful of electrical buses in operation being halted mid-transit. Riders were ordered off the bus because it lacked enough juice to complete its route and had to be taken off line to be re-charged. Riders fumed as they were forced to wait an extended period of time before a back-up bus could be brought out to allow them to continue their transit. Apparently there were charging problems with the electric buses awhile back as well when inadequate outlets used for re-charging the buses caused significant damage that could have been much worse had it not been discovered when it was.

Expect some big developments next week on the Blue Indy front. It looks like the controversial and illegal electric car sharing program could soon come to a halt over the objections of Mayor Ballard. The illegal cars might just start getting towed if Ballard doesn't remove them from the city's streets.

UPDATE: The Indianapolis Star now has a milquetoast story on this latest flap, essentially flagging readers on, not much to see here.


Citing safety concerns, the city has ordered its police officers and other employees to stop charging their municipal electric cars at home.

The suspension comes after circuit overloads in the houses of five employees with take-home Vision Fleet cars. None of the overloads caused fire or injury, but two damaged electrical outlets, said Department of Public Works spokesman Scott Manning.

The shorts likely happened because the cars were not charged on dedicated circuits, Manning said. The cars are generally juiced in a home garage 110-volt three-pronged outlet and require as much electrical current as a refrigerator or a space heater. The cars are Chevrolet Volts, Nissan Leafs and Fusion Energis. The short circuits did not damage the cars, Manning said.

“They’ll inspect the wiring to make sure the outlet can handle it,” he said. “Obviously not everyone knows exactly how their house is wired.”

He did not know how many employees had take-home electric cars but said they include police officers and supervisors for the DPW and code enforcement departments . . .

The Star continues to pretend this whole matter is just a bunch of partisan bickering between the council and Mayor Ballard, ignoring the undisputable illegalities of his actions.

Advance Indiana is also hearing from other city employees that city officials were aware of this problem weeks ago. In this e-mail below, Deputy Chief Bryan Roach e-mailed employees driving the Chevy Volt after an employee's electrical outlet melted while charging the car. Employees were reportedly told when they first received the cars to use the most powerful charger setting when charging the cars at home to "maximize our electric miles." One employee said they were told if you can run a hair dryer with an electrical outlet without blowing a fuse, then you can use it to charge your car. 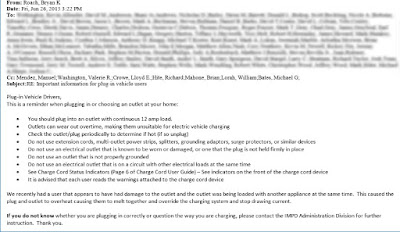 The instruction manual for the Chevy Volt clearly warns operators that "charging an electric car can stress a building's electrical system more than a typical household appliance." It  recommends that a qualified electrician inspect and verify your home's electrical system for heavy-duty service at a 12 amp continuous load. The City clearly did not require an electrician to check the outlets employees planned to use for charging their cars in advance. The manual includes a warning that improper use of portable electric charge cords may "cause a fire, electrical shock or burns, and may result in damage to property, serious injury or death." I'm also hearing that employee's homeowner's insurance policies likely don't cover any property damage caused while charging a city-owned electric car. 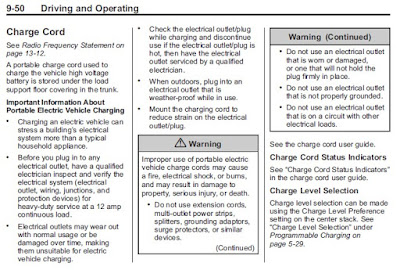 As the heat turns up, Advance Indiana hears that Mayor Ballard's controversial corporation counsel, Andrew Seiwert, left the City for a new job in state government. DPW's Chief of Staff Jeremiah Shirk, whose testimony to the council's Public Works Committee recently so frustrated council members, has also left his job with the City.
Posted by Gary R. Welsh at 8:11 AM

Does anyone know when the hearing on the Council's lawsuit is? Also, rumor has it that the DPW Chief of Staff, another of Ballard's "created" position's and a chief proponent of the electric car sweetheart deal has resigned.

Good question. There should have been an emergency hearing due to the nature of the lawsuit. Everything is effed up in this city. Nothing works like it is supposed to work. The rule of law is dead. Politicians are taking bribes at will. The US Attorney's Office is only interested in chasing after child pornographers. It could care less that hundreds of millions of our tax dollars are being pilfered by the most corrupt politicians in all of America. I don't know why every crook in America doesn't relocate to Indianapolis. It's just a free-for-all here. There's no risk of getting prosecuted for public corruption as long as you are cutting the right people in on the deal.

We are being told in the owners manual, it specifically says to be used on a 220 volt plug, not a 110. More than 2 officers have damage to their homes because of these stupid cars.....

It will not happen but.... if I were assigned one of these vehicles, I'd request the city to install a charging station at my home. Are the people assigned these vehicle expected to pay for the increase in their electric bill?????

Does any one know the status regarding the review (by the City or the CCC) of whether the City/Blue Indy followed the appropriate legal processes on the "taking" of the parking spots for charging stations? Consensus is that the legal processes weren't followed but now who officially is looking into this?

They appear to be moving forward though. Just put in new charging stations at 56th and Illinois taking up about 8 parking spaces historically used by the Food Emporium employees. Not sure where they will park now. Ballard has done a great job of creating demand for his metered spaces where there never was an issue before.

The answer is very clear that Ballard broke the law by simply unilaterally declaring public parking spaces available for Blue Indy's exclusive for-profit use. This is just one of many laws he's blatantly violated during his tenure as mayor. If we had a real prosecutor in this town, he would have long ago been charged with the multiple felonies he's committed over the past 8 years.

So, if you park in a Blue Indy space what happens? What is the basis for issuing a ticket/towing?

The cars are illegally parked. Mayor Ballard isn't a dictator. He just can't decree public parking spaces belong to a private company for their exclusive use. Any police officer could legally ticket and have those Blue Indy cars towed.

It's doubtful the blue shield will extend to the inanimate...

Coal powered cars in a state of EPA threats to coal use? What could go wrong?

Gary - so that you are aware, Bryan Roach is a Deputy Chief of Police for IMPD.

The rats have been scurrying from the keeling SS Greg Ballard since Ryan Vaughn was whisked away to political safety from his $120,000 + perks/bennies (!) COS "salary" to his equally overpaying Sports Corp. position.

Why do we even bother to pay the arrogant and ineffective Maggie Lewis and the other hacks on the City County Council? Other than Christine Scales and maybe a very few other Councilors at times [but rarely consistently like Scales] these insiders are completely worthless... except at taking both sides of an issue (hello, Council District 19!) or excelling at personal promotion (hello District 16).

If you even knew the size of the bonuses Ryan Vaughn received at Barnes & Thornburg for a job well done, anon. 6:23.