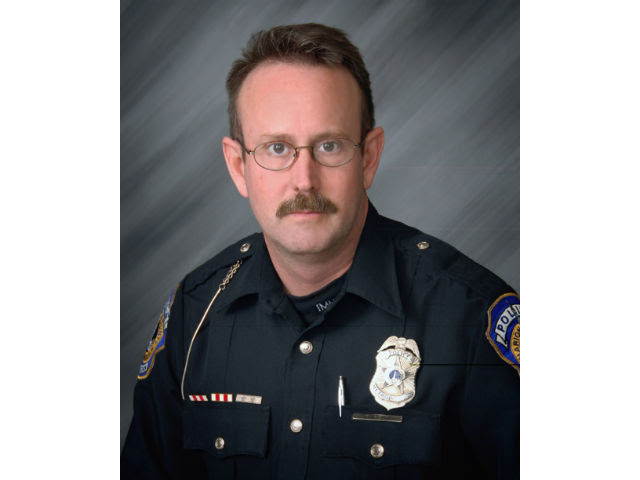 UPDATED: An IMPD officer lost his life tonight after a shootout on the city's northeast side near 34th and Forest Manor Drive. Two officers responded to a report of shots fired in the area around 9:30 p.m. and were fired upon when they entered an alley according to the Indianapolis Star. One suspect, 25-year old Major Davis. Jr., was shot in the shooting. He is reported to be in critical condition at Eskenazi Hospital. The deceased officer has been identified as Officer Perry Renn, a 22-year veteran of the department. He was pronounced dead at Eskenzi Hospital shortly before 11:20 p.m.

This will not come as a surprise, but Officer Renn's killer has a lengthy criminal record. His first arrest, a drug arrest for possession of cocaine, occurred when he was 16. Ironically, the officer who made that arrest was Officer Greg Milburn, who was shot during an unrelated shooting earlier this year. The following year Davis was arrested a second time on cocaine charges. Police found assault rifles at the home where he was arrested but another man claimed to own them. At age 19, he was arrested a third time for drug dealing. Despite numerous arrests, Davis never did time in prison for any of the crimes. WRTV also reports that Officer Renn had indirect contact with the family 11 years ago when his father died of a heart attack while police were trying to arrest him. Davis' family blamed police for the father's death. Davis' father had done time in a state prison for about 3 years for drug dealing.

Early this morning, seven people were shot following an altercation in Broad Ripple, with one victim being listed in critical condition. The shooting happened about 2:20 a.m. outside a shoe repair store in the 700 block of Broad Ripple Avenue. A 23-year old man, Lawrence Jones, was arrested for unlawful possession of a gun as a convicted felon, although police do not believe he was connected to the shooting. Eye witnesses say the shooting occurred despite a large presence of police officers up and down Broad Ripple Avenue at the time of the shooting. News of the shooting gained national media attention.

A woman and girl were shot on the city's east side early this morning in the 3700 block of Brentwood Avenue. The victims did not suffer life-threatening injuries. Earlier Friday evening, an IMPD public information officer, Lt. Chris Bailey, suffered minor injuries after he attempted to make an arrest at Pan Am Plaza after a fight broke out during last night's fireworks festivities downtown. A man came up and struck Lt. Bailey on the head from behind with an object while he was making an arrest. While attempting to capture the fleeing suspect, he fell and injured his elbow and knee.

Expect Mayor Ballard and members of the City-County Council to continue to lay blame on Indianapolis residents for the growing violence problem in the city to support their call for a higher income tax to support public safety. We will again remind readers that the Mayor and City-County Council pilfered the money that was raised from the last public safety tax increase in 2007. They decided that spending the money on the private real estate development projects of their campaign contributors was a higher priority. They have no intention of using the money for public safety, but they need the additional dollars for other priorities, in particular the additional tens of millions of dollars required annually to develop a new criminal justice center through a public-private partnership under which a private operator will build, own and manage our criminal justice system.
Posted by Gary R. Welsh at 10:51 PM

Horrible. It must be almost impossible to be a cop at 34th and Sherman.

What's the common theme in these stories?

Why were those in the Broad Ripple incident even in the area?

Do we have to move to Carmel, Greenwood or out of state to be safe?

Thanks to Officer Renn for having the guts to go into a very tough situation.

Yes, many were shot here in Indianapolis this week-end and a police officer is dead. Headlines this morning say 13 have been shot so far this weekend in Chicago. Terrible numbers. I used to have a good friend, Johnnie Cochran, who ran a little glass shop on the east side called Johnnie’s Glass. He was a traditional kind of small businessman. He lived nearby. Had five rental houses near his house and the shop. An old black guy with a great sense of humor, a kind of wisdom, and a strong work ethic. He had a lot of opinions. He hated sagging pants. Hated them. I hung out with him while he fixed a broken double pane window for me just before he was murdered in his shop by a robber who was never identified or arrested. This was not the worst neighborhood, a little east of Emerson and New York. I lived in Irvington just on the other side of Emerson. But Johnnie and I were a lot alike. Landlords. Small businessmen. Getting older. And he would have been the first to pipe up this morning that every person shot in Indianapolis and Chicago so far this weekend was shot by a black man. He hated that. Not a racist. You could never call Johnnie a racist. But a realist. And it saddened him. And he didn’t know how to fix it. But he wasn’t afraid to say things aloud if they were true. He thought nosy, concerned landlords helped keep tenants straight and he hated government Section 8. He didn’t think the city code enforcers had any business trying to run his property and he called them stupid snot nosed kids acting like nazis. He would have hated our worthless city council passing laws to make him register and inspect his property and pay their “fees.” And he would have cried a little over a dead police officer killed at 34th and Forest Lawn by a black man. He would have wondered aloud if the black man’s pants were sagging and if he was a member of a gang. Most people have long forgotten Johnnie. But I still drive by his old shop that stands just about like it always did, empty now, but full of memories and windows repaired by Johnnie but never picked up. And I wonder who killed him over ten bucks in petty cash and just walked away like it was nothing.

Time for Indianapolis to stop worrying about Super Bowls and start paying attention to public safety. No one will want to come here, regardless of the event, if they here it is not safe to walk the streets.

I pray for officer Renn's family as they now have to plan to bury their loved one. Officer Renn went to work to protect and serve and he lost his life doing just that. May God welcome him with His loving arms.

I'm waiting for the other shoe to drop, and that's the race riots, I remember back in the 60's as a kid, many of the same issues were on the table, for the Black Community, humm, 50 years later, what's changed

The Mayor and Prosecutor are elected positions. Keep that in mind the next time you go to the polls. Never in Indianapolis history has it been more dangerous to be an IMPD officer. All under the watch of the current administration. A mayor whose mouth says public safety is job one, but whose checkbook says sweetheart real estate deals and corporate welfare for billionaires is.

too many guns out there in the wrong hands.

Speaking of the Prosecutor, let's see if Curry is willing to spend the money on a death penalty case. This is THE TIME to pull out all stops and go after this murderer with everything we got.

Heck, I volunteer to throw the switch, push the plunger, but I am betting I would have to get behind a long line of police officers.

When you openly kill police officers you have lost all order. Time to meet this with a hammer and the death penalty is the hammer needed.

Last night a fellow IMPD officer paid the ultimate sacrifice protecting US. This should be a period of mourning, not blaming the the mayor, prosecutor, or anyone else in the ranks that you all feel are responsible. Let that come later
God bless you Officer Renn and may you rest in peace

This officer spent over 20 years protecting us from the dangerous criminals in The Meadows, a place few residents would dare go.

How will we honor him?

It's not easy being a police officer, every call can be the last. -And there is NO GOOD TIME to die in the performance of duty.

Well, if Indianapolis continues to let the Straubification that BALLARD started continue, with the smallest police force ever, and basic equipment denied to police (including toilet paper at the station) we will become Detroit! -A Liberal Democrat stronghold, and dead city/economy.

It's time to let the so-called "Concerned Clergy" and its equal, the "10-Point Coalition" own the Mayor's Office.

Greg Ballard turned his back on Public Safety, allowed the "Straubification" of Indianapolis and flushed Public Safety into the toilet in favor of Big Real-Estate deals, removing a fire station, removing a ladder-truck, and failing to hire police officers and equipment!

Terry Curry (D) is a failure. He doesn't even prosecute traffic crimes...nor the Officer Moore case. He is a Liberal DEMOCRAT, who LSTs criminals attack us! Shamus Patton got an easy and plea for.mass shooting at Black Expo then he continued to victimize us because of a softy plea. Officer Moore's killer didn't get The Death Penalty for Murder on Parole. Terry Curry does not have the ability to prosecute The Death Penalty!

Where is Curry from is he another out of state liberal who comes to Indianapolis and causes havoc with the Justice system?
Y'all remember Jeff Modsett just shows up in Indiana and runs for office, seems Democrats love carpetbaggers!

Did anyone else notice that Terry Curry failed us on multiple Death Penalty matters?

*Officer Moore was murdered by a Parolee who should not have been on parole.

*Richmond Hills murderers will not face The Death Penalty for frying two good people inside their home and causing millions of dollars in damages.

*I have no doubt that Terry Curry will find a rationalization not to give Major Davis The Death Penalty.

Terry Curry isn't a prosecutor he is a "hugger." He fails to prosecute traffic offenses to make a safer city and rationalizes the most violent offenders refusing to prosecute The Death Penalty.

Terry Curry is a FAILURE as prosecutor.

Anon 421 PM, please know that we all have heavy hearts and can't imagine what the entire police force feels at such a time.

We pray you never have to bury another brother or sister and there is no disrespect to you or any officer.

I realize this post has moved down the page and you may not see this but there are many heavy hearts in this town. The citizens of this town love and appreciate those who protect and serve.

Regardless of what you are reading, there are people here who care.