Joan Rivers is talking out loud about what many of us have known for a long time after officiating a same-sex marriage ceremony in New York earlier this week. I'm sure a full-court press is now underway to ensure that Joan Rivers never works in this town again. 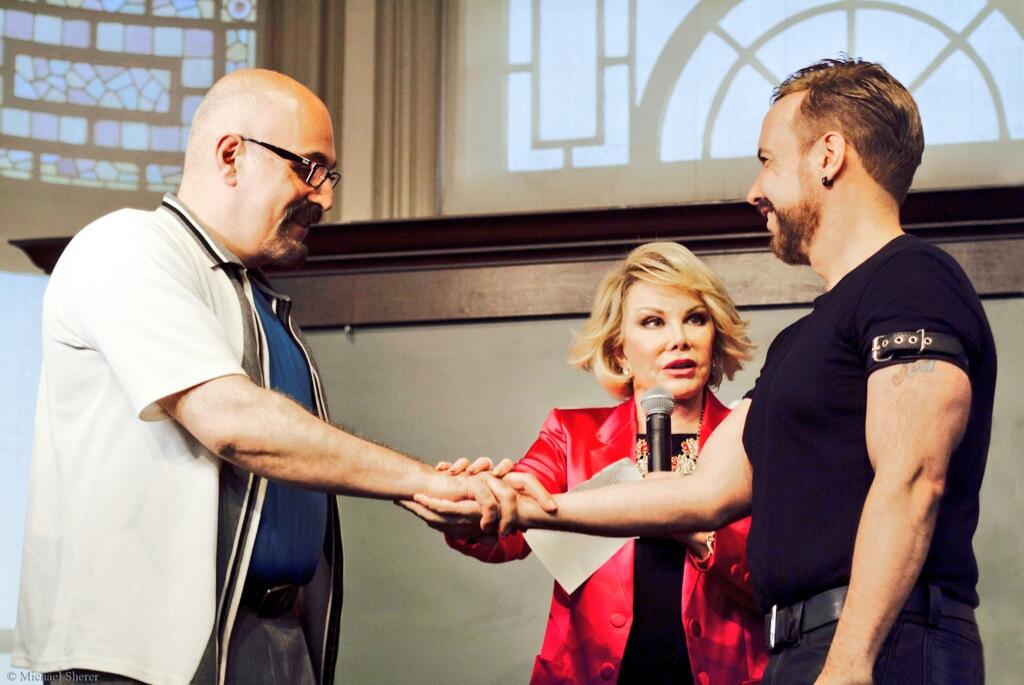 UPDATE: Rivers isn't apologizing as the big media very slowly decided whether to tackle her controversial remarks. If anything, she doubled down on her claims. Through her spokesperson she released the following statement::


'I think it's a compliment. She's so attractive, tall, with a beautiful body, great face, does great makeup.

'Take a look and go back to La Cage Au Follies (sic). The most gorgeous women are transgender.'

I think this is a "politically incorrect" attack on me because I'm old, Jewish, a woman and a "hetty" - a heterosexual,' the statement continued. '

And I plan to sue the reporter who, when he turned off his camera, tried to touch me inappropriately on the a** - luckily he hit my ankle.' Adding: 'Read the book ... if you think that's silly, wait to (sic) you see what I say about FDR and Eleanor!' The plug was for Rivers' new memoir Diary Of A Mad Diva, currently in book stores.

Joan has always been a no-holds-barred comedian who has roasted any and all public figures including herself. I just wish she would stop the madness with her plastic surgery already.

Same-sex couples have a right to marry in Kentucky, a federal judge ruled Tuesday.
In February, District Judge John G. Heyburn II had ruled that Kentucky must recognize gay marriages performed in other states.
"In America, even sincere and long-held religious beliefs do not trump the constitutional rights of those who happen to have been out-voted," Heyburn wrote to invalidate Kentucky's constitutional amendment banning gay marriage.
In Tuesday's ruling in favor of two Louisville couples, Heyburn rejected the only justification that lawyers for Kentucky Gov. Steve Beshear had offered — that traditional marriages contribute to a stable birth rate and the state's long-term economic stability.
"These arguments are not those of serious people," he said.
Heyburn held that the ban on gay marriage within Kentucky violates the constitutional guarantee of equal protection under the law and that it has "no conceivable legitimate purpose." He held that the state's 2004 constitutional amendment and a similar statute enacted in 1998 deny gay couples lower income and estate taxes, leave from work under the Family and Medical Leave Act, family insurance coverage and the ability to adopt children as a couple.
"Perhaps most importantly," the Kentucky law denies same-sex couples the "intangible and and emotional benefits of civil marriage," he wrote.

And what of Mitch, Rove, Cheney and wars...and more...This post is absurd. Rise above this kind of journalism Gary..

I've run the traps on Obama. He's definitely gay, and big media has gone to great lengths to cover up evidence of that fact to protect his phony narrative that goes far beyond his sexual orientation. If his politics were different, the media would have been all over the issue long ago. Actually, it was Newsweek magazine that ran a cover photo of Obama with a rainbow halo over his head and the heading, "The First Gay President." Of course, that was intended as a term of endearment, just like the way the media used to call Bill Clinton the "First Black President."

Her comments sound less credible than even National Enquirer.

Are the Obama's children aliens from Mars or from Neptune?

I think Gary is right about BO's sexual orientation... all the stories of him in Chicago... anyone who knows what that Windy City scene was during those times... the descriptions of the establishments and their locations, the codes of conduct/behavior of the guys who frequented such places, well- I'm just saying... Most importantly is that if BO's politics were different the media ABSOLUTLEY WOULD have been all over the issue long ago

Have you ever heard of adoption, anon. 11:28? Anything is within the realm of possibility. Virtually every family photo Obama presented of himself when he was younger is photoshopped. I'm still clueless about who is actual parents are.

"I've run the traps on Obama."

What does this phrase mean?

I have a hard time telling about people. Even some gruff women I think are totally hetero with a gruff husband and a brood of kids.

People in the gay community in Chicago who had their eyes open knew about BO before he was a known quantity in Chicago. BO was never into the ladies. There are people with memories of his down-low lifestyle when he didn't think anyone was watching. He frequently hung out in gay bathhouses and gay bars. The same goes for Rahm Emanuel. He and Michelle belonged to the Trinity United Church of Christ because it was populated with people like them who pretended to be straight on the outside. Oprah went to the same church, no surprise.

In late May, Wash. DC-based investigative journalist Wayne Madsen had a bombshell revelation about Obama’s membership in a Chicago gay club, Man’s Country. Madsen also reported on Obama’s sexual relationships with other men, including named D.C. politicians and Donald Young, the openly-gay choir-director of the church in Chicago of which Obama was a member for some 20 years — Jeremiah Wright’s Trinity United Church of Christ black liberation theology. Obama’s relationship with Young was confirmed by Larry Sinclair, who claims to have had two sex-cocaine trysts with Obama

Globe’s revelations are consistent with information obtained by WMR during a May investigation conducted in Chicago. On May 24, WMR reported:“President Obama and his chief of staff Rahm Emanuel are lifetime members of the same gay bath house in uptown Chicago, according to informed sources in Chicago’s gay community, as well as veteran political sources in the city.” The report added, “WMR spoke to several well-placed sources in Chicago who reported that Jeremiah Wright, the pastor of Obama’s former church of 20 years, Trinity United Church of Christ (TUCC) on Chicago’s south side, ran what was essentially a matchmaking service for gay married black professional members of the church, including lawyers and businessmen, particularly those with children. The matchmaking club was called the ‘Down Low Club’ but references to it over the phone and email simply referred to the group with the code phrase ‘DLC.’ The ruse, according to our sources, was to make anyone who was eavesdropping on the communications [FBI wiretaps in the Rod Blagojevich case likely contain such references] believe that the references were to the Democratic Leadership Council, also known as the DLC . . . Among the members of the gay ‘DLC’ were Obama and TUCC’s choir director, Donald Young, an openly gay man who reportedly had a sexual relationship with Obama. Two other gay members of the church were Larry Bland and Nate Spencer. Young and Bland were brutally murdered, execution style, in late 2007. Bland was murdered on November 17, 2007 and Young on December 24, 2007. The latter was killed by multiple gunshot wounds. Spencer reportedly died on December 26, 2007, official cause of death: ‘septicemia, pneumonia, and HIV.’”

Madsen also reported that Man's Country got raided by the Secret Service after he reported on Obama's and Emanuel's membership there.