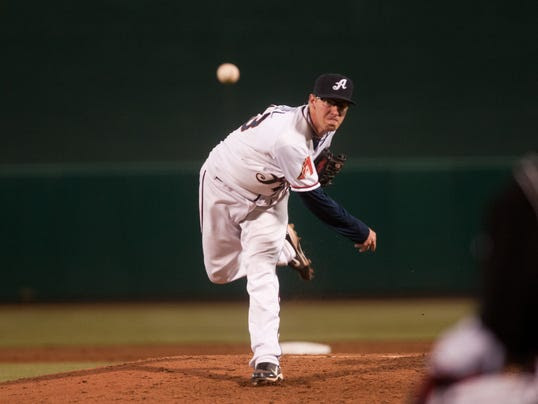 I'm proud to announce that my nephew, Derek Eitel, has been named to the Triple-A Pacific Coast League's All-Star team, which features 30 of the top players from around the league. Derek, who attended Rose-Hulman, is a right-handed relief pitcher for the Reno Aces, the Triple-A farm team for the Arizona Diamondbacks. Derek is 5-1 so far this season and has a 2.70 ERA.
Posted by Gary R. Welsh at 1:50 PM

He'll be in the Majors by the end of the year. Those are great stats.

I think he's pretty high on Reno. This has been his best season yet in the minors by far. He's had nothing but an upward trajectory so far. His pitching has improved remarkably just over the past season. That would be great if he made it to the majors, which I think would be a first for our little town of Marshall.

Thanks for sharing. First I've heard the name Ed Mayer (Philadelphia Phillies, 1890-91). I see someone has added his name to Marshall's Wikipedia entry.

Would it kill you guys to call yourselves Terre Haute?

Is there not a metro area designation that snares both towns?