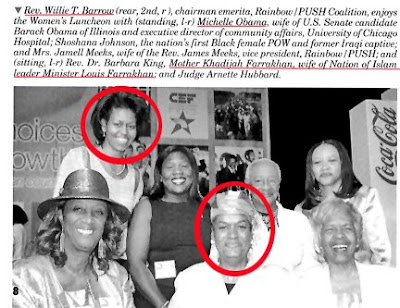 A pro-Clinton blog, HillBlog, provides the most detailed description of the infamous videotape where Michelle Obama, wife of the presumptive Democratic nominee for president, goes off on a racist rant against "whitey." Ironically, her outburst is reported to have happened at a conference in Chicago at Trinity Church of Christ which President Bill Clinton had earlier attended. His presence at the conference is cited as one of the reasons for her racist outburst. Who knew Bill Clinton was to blame for the death of so many Africans? At one time, you could purchase this videotape on the church's website. The photo above, courtesy of Larry Johnson's No Quarter blog, was taken at the conference. This is how the blog describes the videotape, which you can bet will be used by the Republicans this fall:

Michelle Obama appeared as a panelist alongside Mrs. Khadijah Farrakhan and Mrs. James Meeks. Bill Clinton spoke during the Conference, as did Bill Cosby and other speakers, but not at the panel Michelle attended. Michelle Obama spoke at the Women's Event, but referenced Bill Clinton in her rant --- his presence at the conference was the impetus for her raving, it seems.

For about 30 minutes, Michelle Obama launched into a rant about the evils of America, and how America is to blame for the problems of Africa. Michelle personally blamed President Clinton for the deaths of millions of Africans and said America is responsible for the genocide of the Tutsis and other ethnic groups. She then launched into an attack on "whitey", and talked about solutions to black on black crime in the realm of diverting those actions onto white America. Her rant was fueled by the crowd: they reacted strongly to what she said, so she got more passionate and enraged, and that's when she completely loses it and says things that have made the mouths drop of everyone who's seen this.

The "tape" is a DVD that Trinity United sold on its website, and possibly offered free for download up until March 2008 when Trinity's site was scrubbed and the DVDs were no longer offered for sale.

This outburst happened just one month before the 2004 Democratic Convention, when Barack Obama delivered the keynote address.

UPDATE: Obama was asked by a reporter about the alleged videotape. Here's his response:

Sen. Barack Obama on Thursday batted down rumors circulating on the Internet and mentioned on some cable news shows of the existence of a video of his wife using a derogatory term for white people, and criticized a reporter for asking him about the rumor, which has not a shred of evidence to support it.

“We have seen this before. There is dirt and lies that are circulated in e-mails and they pump them out long enough until finally you, a mainstream reporter, asks me about it,” Obama said to the McClatchy reporter during a press conference aboard his campaign plane. “That gives legs to the story. If somebody has evidence that myself or Michelle or anybody has said something inappropriate, let them do it.”

Asked whether he knew it not to be true, Obama said he had answered the question.

“Frankly, my hope is people don’t play this game,” Obama said. “It is a destructive aspect of our politics. Simply because something appears in an e-mail, that should lend it no more credence than if you heard it on the corner. Presumably the job of the press is to not to go around and spread scurrilous rumors like this until there is actually anything, an iota, of substance or evidence that would substantiate it.”

Sorry, but not until I see it.

Since you have talked about this for several weeks, I find it strange that no one who has seen the video has spoken up or that if it were on sale for several months that a copy of it has not surfaced. I wonder if this is one of those Urban Legends.....in the minds of the Obama bashers.

I have a hard time believing the tape exists. I hope it does, don't get me wrong...but until I see it, it's just too good to be true. You've got to consider the source. If a Clinton backer actually had access to this tape, Clinton would've used it. She wouldn't have gift-wrapped it for McCain.

No go without a video. Their smiling faces in the picture don't really jive (at least thus far) with your reporting. I think its manufactured.

Every Obama supporter I know believes she said these things but don't believe it can't be proven or Clinton would have done it. One even said he hoped she said it before they were married. None of them want to admit that if true along with his spiritual advisors what this says about his true character.