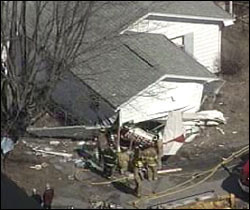 The news of a small airplane crash in Bedford today has taken a very bizarre twist. It turns out the pilot, Eric Johnson, may have deliberately crashed his Cessna aircraft into his mother-in-law's home with his 8-year-old daughter on board, killing both father and daughter. WTHR reports:

A small plane crash appears to be suicide, according to investigators.

Eric Johnson, 44, of Bedford, purposefully crashed into his mother-in-law's house in Bedford shortly after 11:00 am Monday, according to investigators. Johnson and his eight-year-old daughter Emily were killed. Emily Johnson was reported missing earlier in the day.

The plane crashed into a house at 517 Sunny Acres Lane behind the Virgil I. Grissom Municipal Airport, about 20 miles south of Bloomington. (Read the Indiana State Police press release as of Monday afternoon.)

The plane was identified as a 1974 Cessna. The bodies of the crash victims were taken from the crash site at around 4:00 pm. The woman who lived in the home was not injured.

Photos taken by next-door neighbor Greg Rollins show part of the plane's fuselage inside the home. Views from Chopper 13 show that the plane sliced into the bottom of a wall on the south side of the home.

It's not clear if the crash happened at take-off or landing.

Elizabeth Isham Cory, a spokeswoman for the Federal Aviation Administration, said there were initial reports that two people were aboard the plane when it crashed about 11 a.m. Cory said investigators were on their way to the scene. She did not know where the plane's flight had originated.

"It is very possible they could have been flying by visual flight rules, so the pilot would not have been required to file a flight plan," Cory said.