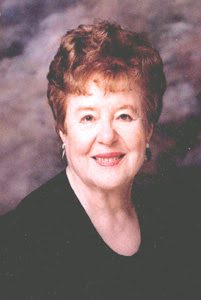 Today brings the sad news of the passing of long-time legislator Sen. Anita Bowser (D-Michigan City). She died early this morning at age 86 after battling breast cancer. The Star reports:

Senate Democrat spokesman Jason Tomcsi said Bowser died peacefully in her sleep about 6 a.m. at a hospice in Indianapolis with a nurse and a friend from Michigan City at her side.

Bowser had been under medical care for the past two weeks, but was released last week to hospice care as her condition worsened.

Bowser was a constitutional scholar and professor emerita at Purdue University. She has served in the Senate since 1992, and was a state representative from 1980 to 1992. Her current term expires in 2008.

Bowser had been the ranking Democrat on the Senate Pensions and Labor Committee and was a member of the Judiciary Committee, the Corrections, Criminal and Civil Matters Committee, the Ethics Committee, and Education and Career Development Committee.

She will long be remembered by Indiana's GLBT community for a stirring and passionate speech she gave just weeks ago in opposition to a constitutional amendment intended to discriminate against same-sex couples and unmarried couples. As I wrote then about her speech:

Perhaps one of the most moving speeches I've heard coming from any member of the legislature were the words spoken by Sen. Anita Bowser (D-Michigan City), who is herself a respected constitutional scholar. "I see a gross violation and potential for a whole lot of mischief [with this proposed constitutional amendment]", she told her colleagues. "I have never seen an issue that deteriorates our beautiful document." "I don't want it soiled," she implored of her colleagues. She said it hurt her that "we lightly ignore" constitutional principles represented by equal protection, due process and the First Amendment. She urged her members not to compromise "your integrity with a cheap, partisan expediency.

"It's nothing more than a wedge issue Bowser explained. She rhetorically asked her colleagues how the mere threat of gay marriages had caused one out four children to be born out-of-wedlock, 51% of women in America to live without spouses and higher divorce rates. She asked how her colleagues could stand by and inflict "great harm to citizens who through not fault of their own are born with this particular phenomenon"--one she noted is increasingly recognized as naturally-occurring.

Bowser attempted to explain to her colleagues that the constitution is a document which gives us rights, "it doesn't talk about intolerance." "Who next is going to be on your hatred list," she asked. "Immigrants." Expressing her great disappointment with the failure of leaders of our public universities to step forward and stand up for the rights of their employees who will be harmed by SJR-7, she pleaded for them to come forward. "What are we doing to our educational system [with this amendment]," she asked. "It's a piece of trash," she told her colleagues before concluding her remarks.

May she rest in peace. Her presence in the Indiana Senate will be dearly missed.
Posted by Gary R. Welsh at 3:32 PM

Cancer is such a horrible disease to suffer or see a loved one endure. My condolences to her family.

It was an honor to have met her. We've lost a good, good friend and she will be remembered as the hero that she was.