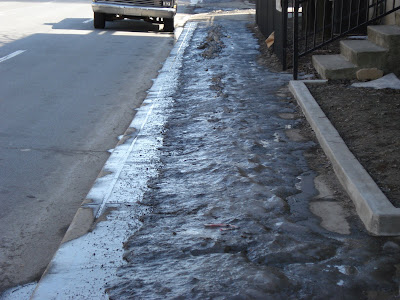 The calendar reads March 9 and the thermometer reads 52 degrees, but this stretch of sidewalk along a busy Michigan Street in Lockerbie is just as dangerous to traverse as it was more than a month ago when a winter storm first dumped snow and ice on it. That's because a city ordinance, which allows the city to mete out $50 fines to property owners who fail to remove snow and ice from the sidewalks adjacent to their buildings, is rarely enforced and acts as no deterrent to derelict property owners like this one at the corner of Park & Michigan. And thanks to a recent court decision, pedestrians who slip and fall on an unkempt sidewalk and injure themselves have no remedy against the property owner, notwithstanding a city ordinance which imposes a duty on them to clear the snow and ice from their sidewalks.
Posted by Gary R. Welsh at 12:21 PM

It sucks to live on the north side of the street.

Maybe you should go buy them a big bag of salt and put it on their doorstep. LOL That's just pathetic.

Geez, AI. Get over it. We agree but just walk around.

As an older pedestrian, I am with AI on this issue. I admit: I don't shovel my own sidewalk - none of my neighbors do. I shovel from my porch to the street. We walk in the street after monster snows - it's a quiet side street with little traffic.

The picture AI shows is an absolute worst-case example. It's on Michigan St, a busy street that snow plows heaped that pile of snow directly onto the sidewalk. That's not a normal accumulation of unshoveled snow: that's plowed snow off of Michigan Street! The close houses sheltered the sidewalk from the sun's melting warmth. Michigan St. is way too busy to safely walk in.

A very nice couple owns the property. On this matter and other neighborhood concerns with their property, they have been less than cooperative. Michigan Street is a very busy one-way street. Traffic flows in all 3 lanes at a pretty good speed so it is not safe to walk in the street.

Wilson! Why can't you pay some of the neighbor kids to shovel your walk for you? They need to work and it will give them the chance to get some money by EARNING it!

Wilson, the way you run around with your camera you are no older pedestrian.

I pay rent and shouldn't have to shovel my 50 foot walk to the drive but the owners didn't get to it fast enough so I shoveled the thing. I am what my sister calls middle-aged, and I disagree, :), but I am the youngest in my building and worry the 80+ year olds in my building would need emergency care and want them to get the help.

I would like to think that people would do things to help my 80+ parents and they do.

You just do stuff to help other people but you only do if it helps yourself. It is selfish. It is sad that this is the way the world is going.