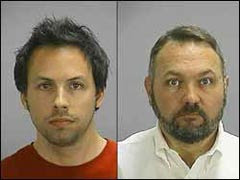 A high profile Atlanta official has stepped down from his position as chairman of Atlanta's regional transportation authority after he was arrested and accused of having sex with an Indianapolis man in a restaurant bathroom at Atlanta's airport. Locally, the Indianapolis Star reported on the arrest of an Indianapolis man, Michael Pettry, in connection with the arrest last week of Atlanta' MARTA chairman Ed Wall, shown on the right in the picture above next to Pettry. It turns out one of the accused, Ed Wall, is the married father of three children. As the Atlanta Journal Constitution described Wall:

Wall is well-known in local political circles. He served on the Atlanta Regional Commission as a citizen member and is a member of the regional Transportation Planning Board, sitting at the same table as the metro area's most prominent politicians, including Atlanta Mayor Shirley Franklin.

But Wall is far from conventional. He usually sports a bow tie, and he carries a backpack to meetings. In his trademark country drawl, Wall frequently makes self-deprecating jokes that break tension and leave observers laughing out loud.

The Constitution-Leader provided graphic details of the encounter an undercover police officer alleges he witnessed between Wall and Indianapolis Symphonic Choir Director Michael Pettry following last week's arrests. The two men reportedly met online at Craigslist before the encounter. As it turns out, there have been a number of other arrests in the same location, a couple of which involved high profile individuals. The newspaper writes:

According to the police report, Wall was not shy about what he was doing.

The plainclothes officer wrote that he first encountered Wall at the urinal in a restroom on the west concourse that had been the location for several other arrests for public indecency. The officer, S.D. Demeester, wrote that Wall appeared to be fondling himself.

The officer then observed Wall and a second man, Pettry, leave the restroom and walk to a second airport restroom that was closed for cleaning and then to a third restroom near a restaurant in the airport atrium, where they allegedly engaged in oral sex.

After Pettry left the restroom, Wall came out of the stall and stood at the urinal to the left of the undercover officer, reports show.

The officer wrote that Wall "began to look at my genitals as I attempted to urinate" and he tried to start a conversation "in reference to me receiving or giving oral sex." All the while, Wall continued to fondle himself, according to the police report.

"At that point I identified myself as a police officer and placed Mr. Wall into custody," Demeester wrote.

There have been 27 arrests for indecent exposure between December and Wednesday, airport officials said Thursday. Among those arrested: an advisor with the Centers for Disease Control and a Spelman College professor.

Hi there. My name is Mike Pettry, but I'm not the Michael Pettry that was involved in this arrest. I just wanted to set the record straight for anyone who googles my name (this blog is the second hit that comes up) ... Mike Pettry, the New York musical theatre composer, is NOT the same guy as the Michael Pettry mentioned above, even though they we have the same name and both have careers in music.

I dunno about you, but I think the real investigation ought to be for the cops who offer to put their genitals on display to other men in order to nab them for gay sex when they offer. I mean seriously, what male cop in his right mind (aside from a CLOSETED GAY ONE) would want to do that stake-out/sting? Seems to me their investigating the wrong dudes!