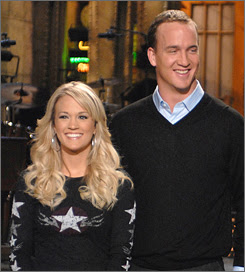 Peyton Manning spent his 31st birthday guest-hosting NBC's Saturday Night Live. Tonight's show was one of those nights when every skit fell flat, particularly any involving Manning. The opening skit with him physically abusing kids at a football camp, repeatedly using the f-word in front of them and otherwise being a poor role model was a bad start for the night and it never got better as the show dragged on. The football camp was supposed to be a parody of a United Way promotion, but I found it to be in very poor taste. During his very brief opening monologue, Manning introduced his family, parents Archie and Olivia and brother Eli, who were in the audience. Noticeably absent was his wife, Ashley. The "Not Ready For Prime Time" Peyton would be well-advised to stick to his day job based on tonight's performance. His performance didn't come close to Tom Brady's appearance on the show.
UPDATE: According to a Star story, Manning was pleased with his performance. The skit I found offensive the Star describes as the funniest. The Star's Mark Alesia writes:

What followed was perhaps the funniest part of the show, the NFL/United Way commercial parody. After telling a child who couldn't catch one of his passes, "You suck," Manning showed the kids how to break into a car. Then he gathered them around for some street wisdom."I'll kill a snitch," Manning told the children. "I'm not saying I have. I'm not saying I haven't."The bit ended with an announcer saying, "The NFL and United Way urge you to spend time with your kids so Peyton Manning doesn't."

The Star indicates his wife, Ashley, was in the audience, although she wasn't introduced by him as part of his opening monologue. His brother Cooper was also present.
Posted by Gary R. Welsh at 11:42 PM

Don't worry. I'm organizing a search party to go out and find your missing sense of humor. So, in the same vein as your post, you should stick to blogging about politics.

Sorry, you can't watch SNL and expect to get "Politically Correct, Image Conscious Saturday Night Live" when it comes to the local hero.

Geez, AI, get a life. Many, if not, most of SNL's skits are in poor taste.

The two laugh out loud moments I thought was Peyton talking about his Mom not making it into the NFL and the Weekend Update story of the cat with hip replacement - it would have been cheaper to do the whole cat replacement option instead.

The rest was typical SNL - which is why I have not watched in 20+ years. Where is a Bass-O-Matic when you need one !

I watch SNL regularly. It was one of the most boring shows I've watched recently. I agree with your take on the Unitey Way parody. Peyton's parents surely were squirming in their seats watching it.

He's clearly trying to augment his image. I can't figure out why, but he is.

He made fun of himself, regarding all the commercials he's in, which was funny.

If I'm home on Sat. nights, and awake, I prefer Mad TV. I watched SNL this week because of Peyton. The skits were funny, I thought, but not overly so.

A C-plus effort by the writers and cast, including Peyton.

The lockerroom skit was borderline homophobic, but, hey, it's a lockerroom.

Maybe it's just me, but I've found much more humor in some of the commercials Peyton has appeared in than the skits from last night's show. Let's face it, it was a horribly scripted show from start to end. There were absolutely no moments when the audience was laughing really hard. Derek Jeter had everyone rolling in the aisles when he dressed up as a baseball player's wife sitting in the stands with other player's wives commenting on the players' physical prowess. Even Fran Tarkenton's appearance many years ago beat this one hands down--and I never cared for Fran Tarkenton.

Nothing on SNL is that laughable any more, Gary. Hasn't been for years.

Peyton did OK. Not great, but OK.
He's a Hall of Fame QB, not a writer, not a comedian. He can only work with what he's got. And it wasn't much.

The commercials he did were 30-second snapshots required to grab your attention with fantastic visuals and writing. SOme of Madison Avenue's best minds devised them.

Not so SNL. Sadly.

It would be interesting to hear what Mr. Family Values, Coach Dungy, thought about Manning's performance.

Isn't it amazing SNL was great when it had 5 comedians. Now the list of is about 20 and you can't figure out who is who, or better yet, who cares?

I didn't know SNL was still on. Who are the stars?

I couldn't name any of the stars.

The last one I could name, was Tina Fey. She gave up a few yrs. back.

It refuses to die because the producer knows where some NBC executives buried some bodies.

Don't laugh. It's the only explanation. The show just isn't that good any more.

Excellent point about Tony Dungy. Although, it is late night TV and the kids shoudn't be watching it.

The only show with a football player hosting worth watching, SNL-wise, was the PAYTON episode about 20 yrs ago..Walter Payton, that is

When Chris Botti recently performed he too wished that SNL would go off the air for two reasons:

1. It is ins't funny.
2. His bass player is in the SNL band and he always has to get him back to NY.

Everyone in the audience cheered when he said it wasn't funny anymore. Everybody knows.

I have to disagree, AI. While it was nowhere near the old days, I found some LOL moments - Peyton dancing in the locker room scene (who KNEW he could move like that?!?!) and the last skit with him and the woman on the porch. That reminded me of a classic Kelsey Grammer skit ("Cat's a$$?"). And while the commercial with the kids was not PC, it was funny to see Peyton do some of those things. Oh, and the Robert Smigel cartoon? Any parent who has ever been subjected to episode after episode of Dora the Explorer would ROFL at "Maraka" and "Mittens".

Not the most-stellar show ever, but funny nonetheless because it was Peyton. JMHO.

Most of the humor on that show, is east coast, uppity, condescending, seemingly "brainy" writing.

Kinda like Seinfeld, without the humor. It worked for Jerry, and he wisely knew when he'd worn out his welcome.

It's just not that funny any more.
The whole "we think it's funny and if you don't you're nnot hip" just isn't hip any more.

Peyton did OK. Not fantastic, but OK. He did shake his ass in the lockerroom scene. Hubba hubba.

Peyton's wife was in red, sitting next to Cooper when they showed the Manning family, introducting his mom, Eli and his dad. Eli's fiance was sitting on the other side of Cooper.

One word for this review: AWESOME! That was hysterical - I laughed until a little bit of pee ran down my leg! LMFAO! I mean, I busted my butt writing up a review (www.talkingnfl.com), but you nailed it, man. I tip my cap to you - well done, sir.

...seriously, this is a joke, right? You're actually from New England, aren't you?