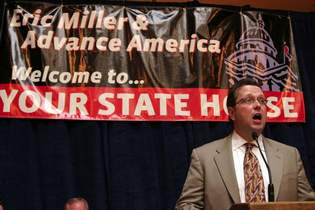 I had to look far and wide for this particular picture, but I finally found it with Lesley Stedman Weidenbener's story in the Louisville Courier-Journal about the rally Eric Miller and his "nonpartisan" Advance America organization held at the State House yesterday. Standing at the podium is SJR-7's author, Sen. Brandt Hershman (R-Wheatfield). Notice the supposed nonprofit organization has its founder's name (and former GOP candidate for governor) emblazoned in big letters on the banner behind the podium just like it did two years ago when a similar rally was conducted. Standing in front of the crowd yesterday, the twice-married and childless Miller said in defense of a constitutional ban on same-sex marriage, "It's right versus wrong."
"Do you support traditional marriage?" the amendment's author, Sen. Brandt Hershman, called to the crowd. He should have directed the question to himself. Hershman, like Miller, is married for the second time. His former wife, according to the Logansport Pharos Tribune, claims he demanded she abort their unborn child before he filed for divorce.
And how many Democrats joined Miller on the stage yesterday? In every single news account I've read so far, only Republicans have been referenced. In addition to Hershman, I've seen Rep. Eric Turner (R), Rep. Woody Burton (R), Rep. Jackie Walorski (R), and Rep. Bruce Borders (R). Just like all of the "nonpartisan" groups events, there were plenty of Republicans and no Democrats.
Meanwhile, House Speaker Pat Bauer is reacting to yesterday's full-page ad in his hometown newspaper accusing him of playing politics with the amendment. Bauer told the South Bend Tribune the ad will have no impact on whether a vote is taken and "is meant to be a poisonous dart at whoever they perceive as their enemy." "The legislator said his office received few phone calls because of the ad." Bauer took issue with the ad's claim the Democrats lost control of the Indiana House because of his refusal to allow a vote on the amendment the last time Democrats were in control. "He said a paragraph in the ad which said Indiana voters removed him as speaker in 2004 because he blocked a vote on the issue was erroneous." "What happened, he said, is that his party didn't win the majority in the House."
Posted by Gary R. Welsh at 6:45 AM

Sadly, Earl Harris (D-East Chicago) spoke at Miller's HateFest - I saw him on TV discussing the "Abolish Property Taxes" issue that Miller is also flacking. He was pointing out how raising the sales tax might raise some of the revenue now provided from property taxes. Harris was not seen on TV hyping the Anti-Marriage Amendment.

Didn't see that Wilson, WTHR was on live during its noon broadcast and the podium was filled exclusively with Republicans.

Miller has at least one other Dem firmly in his camp that I know of, Sen. Richard Young from Milltown (not be confused with my right-winger-from-hell state sen. R. Michael Young, who is a Republican).

Young the Democrat spoke at last year's rally, but I don't know about this one.

In some respects, the lack of certain people might be telling about the mood of the General Assembly and Miller's power.

Who was at his rally last year?

Name recognition, perhaps he wants to run for president?

Rep. Duane Cheatham (D) also appeared at the event. He uses a gay man to get elected, then does all he can to treat people like him as a second-class citizen. Nice guy.

Everyone involved in the Cheatham campaign knew full-well what they were getting...there were no secrets there. They made their bargain with the devil to get a Democratic majority.

If Bauer had done a better job divying up the campaign money, the margin wuld've bene more than Cheatham's one-vote D majority.

It's just one of the compromises we all make when politics is involved.

When in the hell is the IRS going ot go after this man's tax-exempt status? They're bullying the hell out of me over a (contested) 2003 deduction for $1,100, to the degree you'd think I personally stole the money from Laura Bush's pocketbook.

(Sorry for that visual)

But this Miller fella blatantly flaunts the 501-c-3 code on a daily basis. This sign alone does it. Besides, he's a con.

How does a regular citizen get the IRS to investigate, or act on an open file? I'm clueless about that.