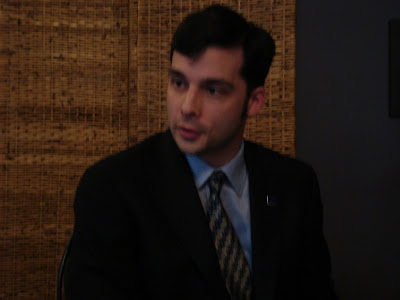 State Rep. Jon Elrod (R-Indianapolis) addressed a gathering of nearly three dozen Log Cabin Republicans at Aesop's Table tonight, providing an update on the 2007 legislative session. Elrod, a co-sponsor of the hate crimes legislation, expressed his disappointment at the lack of progress on that legislation and Rep. Jeb Bardon's non-discrimination legislation for which House Democrats failed to schedule a hearing this year. House Democrats refused to call down HB 1459, the hate crimes legislation authored by Rep. Greg Porter (D-Indianapolis), because of an anti-abortion amendment filed by Rep. Jackie Walorski (R), thereby killing the bill. The bill had been earlier approved by the House Courts and Criminal Code Committee on which Elrod sits by a 9-1 vote. An opponent of SJR-7, Elrod expressed cautious optimism that the amendment would be amended this year, which would have the effect of starting anew the four-year process of getting the measure on the ballot.

City-County Councilor Scott Keller also addressed the group tonight. Keller, who has almost been alone in the past as an elected Republican official advocating equality for gays and lesbians, welcomed Elrod to the fold of Log Cabin Republican supporters. Keller, a co-author of Indianapolis' Human Rights Ordinance protecting people from discrimination because of their sexual orientation or gender identity, pledges to work to provide domestic partner benefits to city-county workers if he's re-elected this year.