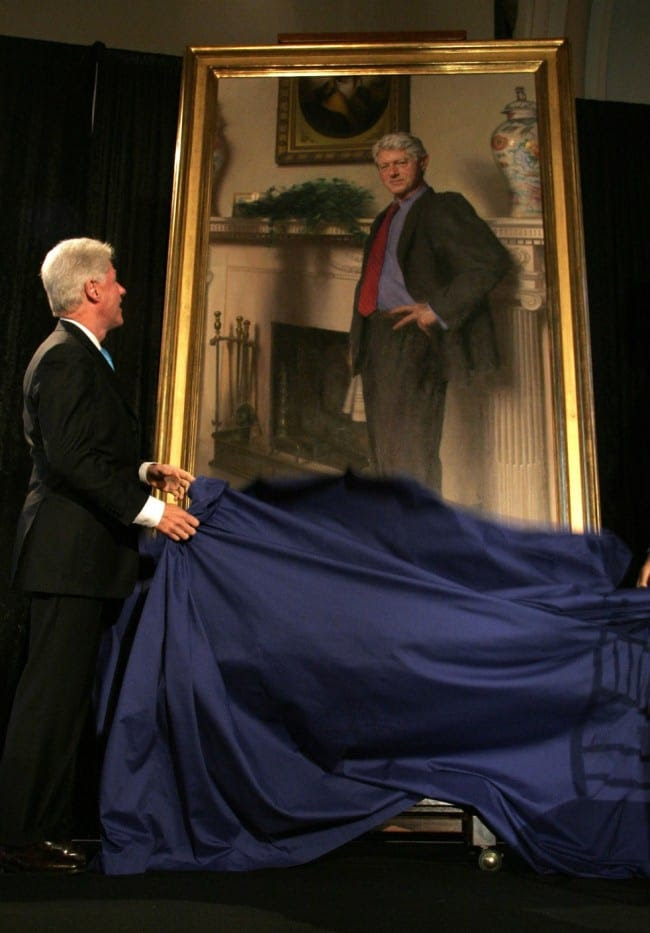 A former neighbor of mine who was an art teacher at Herron School of Art and accomplished artist in his own right once showed me a number of his paintings and explained to me hidden meanings he had in each of them. As he explained to me, this is not an uncommon thing for artists to do. The artist who painted President Bill Clinton's official portrait is no exception.

Nelson Shanks revealed that a shadow cast on the fireplace was that of a mannequin adorned with a blue dress as a reminder of President Clinton's shameful extramarital affair with White House intern Monica Lewinsky. Shanks told the Philadelphia Daily News that painting Clinton was his hardest assignment because "he is the most famous liar of all time." He added the nod to the Lewinky scandal to the painting because of the shadow it cast over his presidency.


If you look at the left-hand side of it there’s a mantle in the Oval Office and I put a shadow coming into the painting and it does two things. It actually literally represents a shadow from a blue dress that I had on a mannequin, that I had there while I was painting it, but not when he was there. It is also a bit of a metaphor in that it represents a shadow on the office he held, or on him.

Shanks told the Daily News the Clintons were aware of the shadow's meaning and hate the portrait for that reason. He said they demanded it be taken down from display at the National Portrait Gallery. The portrait was taken down about three years ago, although not because the Clintons requested it be taken down according to officials at the gallery. I wonder if Shanks' depiction of Clinton making a downward pointing V-sign with palm inward isn't a reference to being sexually violated by a horned pagan god
Posted by Gary R. Welsh at 8:38 PM

I'm sure that the party of Boehner-McConnell found some penumbras and emanations from the CONstitution showing that they should continue to fund the Smithsonian and this related art museum. Voting really makes a difference.

The establishment new how to prey on a man's weakness - win a presidency and plan 9/11 and more.

For sure, anon. The most important revelation of the Lewinsky scandal was the fact that she was a spy for the Israeli Mossad. The Israelis were blackmailing Clinton with the secretly-recorded conversations between the two of them they had in their possession. Lewinsky's original job at the White House had her assigned to Leon Panetta's chief of staff office. Panetta had ties to the intelligence community from his work as an intelligence officer in the Army back in the 1960s long before he became Obama's first CIA director. Panetta had been a Republican who served as an aide to a Republican senator from California and as a member of the Nixon administration before he switched parties to run for Congress from California.

I'd like to see the George W Bush portrait with the shadows of thousands of suviving soldiers who had their limbs blown off, along with there testicles and bladders.

Talk about a president who lied! (WMD's, "We know where they are!" we were told)