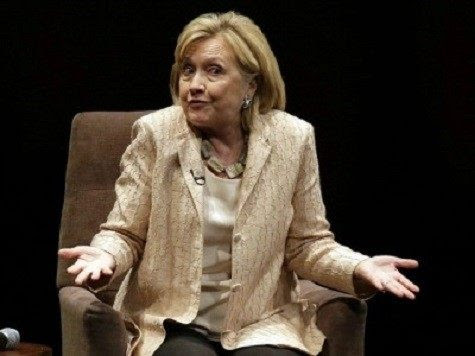 For people who have followed the Clintons throughout their political careers, the flaunting of laws is nothing new. This comes on the heels of a disclosure that the Clinton Foundation accepted millions of dollars in donations from foreign governments during her tenure as Secretary of State. An ethics agreement the foundation reached with the government prior to her tenure as Secretary of State was supposed to bar it from accepting donations from governments seeking favorable treatment by the State Department. During Bill Clinton's administration, it was learned that Clinton's campaign illegally raised millions of dollars from foreign contributors. Despite clear violations of federal campaign finance laws, the Clinton Justice Department swept the investigations under the rug. As with all Clinton controversies, the latest disclosure will likely be brushed aside as the state-run media pushes us towards the two preordained presidential candidates in 2016--Hillary Clinton and Jeb Bush.
Posted by Gary R. Welsh at 7:45 AM

"What difference does it make"

I suppose if you believe the rule of law doesn't apply to the Clintons it makes no difference. After all, hasn't this country became a nation of men and not laws anyway?

Hillary Rodham Clinton- along with her husband-for-sow-... one of the most vile, most hypocritical, most corrupt, most power-mad, most money-hungry, and most untruthful, and scheming manipulators of the 20th and 21st Centuries.

I can already hear the leftist Democrat loons who have an adoration fetish for the Clintons.. "....b-b-b-but what about that George Bush!?!"

The Clinton's probably did more then anyone else to destroy what was left of Democratic Party of FDR. The Clinton's finished the "work" of Jimmy Carter.

Carter's sell out to Corporate America is exemplified by appointing former UAW President Leonard Woodcock the first United States ambassador to the PRC in 1979. Per Carter - "Leonard Woodcock, still highly conversant with, and whose heart was attuned to, the labor movement of America, negotiated the first trade agreement, Most Favored Nations agreement, with China, in 1979."

It was Carter who signed off on Depository Institutions Deregulation and Monetary Control Act, which deregulated the S&Ls. This led to the Keating Five, which included John McCain. Silverado Savings and Loan collapsed and Neil Bush was a Director another scandal of this era.

Slowly over time with little political opposition our Industrial Base was dismantled by both Parties. The Clinton Presidency finished off the job - NAFTA, and dismantling Wall Street Regulations.

The idea that the Clinton's were friends of the working class was bogus.

The Mega-Media as best represented by MSNBC has been non-stop cheerleaders for Hillary and pushed any other potential Democratic Candidate to the side.

It is truly the Rule of Money and the 1%. Who ever best serves their interests will be interviewed and allowed to run for Political Office.

Flogger, you are absolutely correct about the Clintons and their role in destroying what was left of the Democrat Party of our great grandparents. The Democrat Party is taken over by far leftist socialist-Marxists who detest America as it was founded.

Bill and Hillary Clinton have more scandals in their past than Richard Nixon and Tammany Hall put together.

Bill Clinton paved the way for socialist communist Barak Obama's final destruction of the former American way of life. It was Bill Clinton who pushed NAFTA and with it the economic coup d'état of American industries and capital to Asia. Bill Clinton sold American classified military technology to the Chinese that should never have left our shores and for this treachery I believe Bill and Hillary are today paid with uber-sized speaking fees and illegal contributions to themselves, their phony foundation, and to their "campaigns" by the Soros-type transnational corporatists.

That Democrats revere these two, including all the other miscreants that populate and run today's "Democrat Party", blows my mind.

Don't worry, she'll pardon herself if Goldman Sachs wants her to run for president.

It's a known fact that Bush's WH used private email accounts rather than their official government one in an effort to evade the Presidential Records Act.

What Clinton did was technically legal as long as all of those emails get archived along with the ones from her @state.gov ones within a given time frame.

Because the Republican's have as bad as candidate pool to chose from, as well as a terrible platform from which to run, Hillary will win the 2016. Get over it already.

As memory serves me, Former Sec. State Colin Powell used his private email account and his predessor Condi Rice didn't even have an email account.

Can someone remind where the outrage was then??

Anon 1:10.. you've got me laughing out loud. You left and far left liberal Democrats do what you only can when presented with the facts about your false gods... you do everything possible to change the subject. But the subject ISN'T George Bush, is it?

Thank you for proving it! :)