The State House media is pumping out press releases again today for the owner of the Indy Eleven minor league soccer team, who has opened up a large wallet of money from unknown sources to pay a large team of high-paid lobbyists to pass legislation that will force taxpayers to finance an $83 million soccer stadium for his one-year old soccer team. Today's press releases from your useless State House reporters tell you about a planned State House rally. Advance Indiana exclusively reported that this rally is being organized by the Indiana Soccer Association , a supposed nonprofit youth soccer organization run by one of Ersal Ozdemir's high-paid lobbyists, J. Murray Clark, Jr., that has been turned into nothing more than a lobbying arm for Ozdemir's self-serving purposes. If your lawmaker supports HB 1273, then you can assume that he or she has been bought and paid for by this shadowy Turkish immigrant and his lobbyists. The Indiana General Assembly has become the most corrupt legislature in all of America filled with a bunch of street whores selling themselves off to the highest bidder. There are no longer any watch dogs in the media to protect the public's interest so until you take to the streets to demand change, your elected officials will continue to sell you out to the highest bidder.

UPDATE: Some hope there is some sanity left in the legislature. Senate President David Long will not commit to allowing a hearing on this taxpayer ripoff much to the disappointment of WISH-TV's Jim Shella, whose TV station pimps nonstop for this taxpayer boondoggle because of its financial relationship with Ozdemir's Indy Eleven.

It looks like fake conservative State Sen. Brandt Hershman's vote has been bought off. He plans to offer an amendment to the bill and give it a hearing next week to make its passage more palatable in the Tax & Fiscal Policy Committee according to the Gannett-owned Indianapolis Star, which is blocking reporting of the rampant corruption occurring in plain view over at the State House to ensure passage of more public funding for another sports palace. There should be an undercover FBI sting operation taking place in that State House right now so all of these crooks can be rounded up and hauled out of the State House in handcuffs, but this is Indianapolis, the most corrupt city in all of America where no such thing can occur. We're sick and tired of our government officials being bought by people with filthy money who think the public treasury is a spigot that can be turned on and off as they please to finance their own private self-serving interests.

Only about 50 people showed up for the rally in support of this pathetic attempt to rape taxpayers and over half of them are on Ozdemir's payroll. 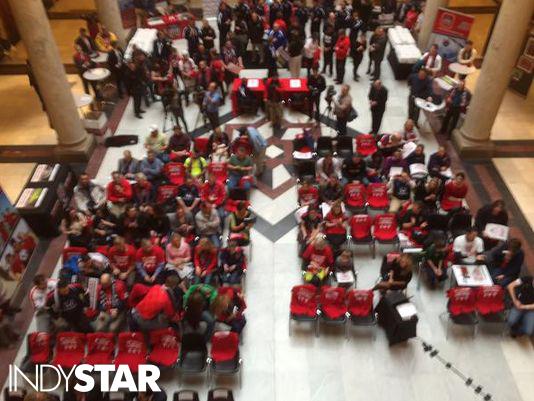 This acrid deal will probably go through- pushed by the harem of the male escorts swarthy Turkish man Ersal Ozdemir buys off on a regular basis- simply because it makes no sense at all. That is what politicians do- they justify "deals" that make them and their pimps wealthy but drain the taxpayers for years to come.

As a long-time observer and participant in the Party, the only thing that surprises me about Murray Clark and the recent news about his connection with the silly Indy Eleven is that it is only now being reported what a total political and financial whore Murray Clark is. No wonder his name was mentioned in the short list of potentials to fill the seat of Indy's current huge mayoral failure on the CC Building's 25th Floor as those are "personality traits" necessary to continue in the vein of Greg Ballard and Bob Grand.

We have the best political sluts money can buy. Ask Ersal. Greg Steuerwald, Greg Bosma, Eric Turner, Murray Clark, to name a few of Indiana's better known morally and ethically bankrupt political prostitutes... and one day...one day soon, other well-connected political hack attorneys will be outed (some with their wives) as well.

I laughed when I drove by the old IndyFringe Theatre and saw the mini-billboard sign proclaiming that it is now the "Indy Eleven Theater"! What a freaking joke. Who IS this Turk and where the hell is his money actually coming from???

The dirty Republicans are trying to push this through before our great President puts a stop to all these corrupt deals.

If you're a conservative, you should be voting for the Democratic Party. Republicans are just a rich-man's party of thieves robbing from the poor to get richer.

It's unConstitutional insanity; that legislators have become lobby horses for special interest. Ignoring their oaths & the people's interest; they'd rather play poker with the public purse than do the work of represention.

How much better life would be with the best practices of representation; perhaps & including maintenance of infrastructure, which is failing under our feet...

Seein' how the door's been flung wide open; our fly fishing club looks to leverage the public treasury, to build camps & club houses along stretches of the St Joe & Pigeon Rivers. If we feed a few campaigns & keep laughin' while slappin' our knees- we might just get this done.