Will There Be An Investigation Of Poulakidas' And The Democrats' Illegal Attack On Scales? 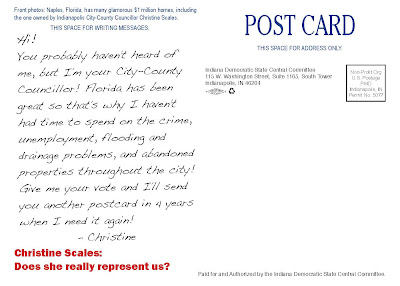 A post card mailed out by the Indiana Democratic Party on behalf of the campaign of its Democratic candidate for the city-county council District 4 seat currently represented by Christine Scales apparently violated several laws, in addition to being a new low in negative direct mail pieces. The offending post card impersonated Scales by leaving voters with the impression she had handwritten a note on the post card to them from Naples, Florida where her family owns a condominium. It suggests she hasn't had time to devote to her work on the council because she has been spending a lot of time in Florida instead of her northeast side district where her family actually lives. The truth is that Scales has an exemplary attendance record at council meetings and regularly attends neighborhood meetings and events in her district. It also suggests she owns a million-dollar home in the condominium community depicted on the post card, which is also false.

To affix some one's name to a written statement as if the statement was made by the named person is forgery, a Class C felony. The applicable statute is I.C. 35-43-5-2(b), which reads:


A person who, with intent to defraud, makes, utters, or possesses a written instrument in such a manner that it purports to have been made:
(1) by another person;
(2) at another time;
(3) with different provisions; or
(4) by authority of one who did not give authority;
commits forgery, a Class C felony.

Because the U.S. Mail was used to perpetrate the crime, it also raises the question of whether it violates the federal mail fraud statute as well. The post card obviously had its intended effect. Scales received a number of phone calls from voters asking why she had sent them the post card under the mistaken belief she had sent it to them. The criminal violations don't end there though.

The post card contains a disclaimer that it was paid for and authorized by the Indiana Democratic Party. Because the purpose of the direct mail piece was to advocate for the defeat of Scales by impersonating her in a negative light by name, it should contain a disclaimer specifically stating whether it was authorized by her opponent, Kostas Poulakidas, pursuant to I.C. 3-9-3-2.5. Violation of the disclaimer law is a Class A misdemeanor.

According to a recent campaign finance disclosure report filed by Poulakidas' campaign, he made donations totaling $12,300 to the Indiana Democratic Party. Most observers believe Poulakidas' contributions made to the state party were made to cover the cost of direct mail pieces the state party has been sending out to voters in his district on his behalf. It is incomprehensible to think that Poulakidas did not have advance knowledge of the offending mail piece and approved of it being mailed out. The use of the state party to mail out the post card is simply a ruse to put distance between himself and the offending piece.

In e-mails responding to criticism of the direct mail piece, Poulakidas has sought to deflect attention to it by falsely accusing Scales of saying he and his wife were bad parents because she questioned whether he had time to devote full time to the job as she does given that he is a partner at a big law firm and that his wife has worked full time until recently for DevelopIndy, the economic development agency for the City of Indianapolis, and that the two of them have young children. Poulakidas is also angry that Scales has brought attention to the fact that his work as an attorney/lobbyist creates many conflicts of interest for him if he was elected to the council. Regardless of what Poulakidas offers as a justification for sending out the offending direct mail piece, as an attorney, he should know what the law provides and stay within its bounds. He and the Indiana Democratic Party should now face the consequences for blatantly violating the law.

UPDATE: Here's the text of an e-mail Poulakidas sent to a voter defending the post card attack against Scales:

I do appreciate your email. When Christine talked with you about the postcard, did she mentioned that for the last 3-4 months part of her campaign platform has been that my wife and I are bad parents because we are working parents so are not qualified to serve in public office? (which is factually incorrect, as my wife stays at home with our daughters). Did she tell you about some of the false information she has put out on the blogs? Did she also tell you that in her last campaign against a Democrat they both made a public pledge not to go negative, then she gave the Republican Party $10,000 who then dropped a very nasty negative, and factually incorrect ad on the Democrat the weekend before the election timed so that the Democrat did not have time to respond? The Democrat lost by 1%. Did she share all these items with you?

I do agree that character is important but what does it say about someone’s character when they bring your family into the campaign, what does it say when they come to your door and but fail to tell you all negative attacks they are doing. I do appreciate your email, and hope to get your vote, but I also know that decision is up to you and can only hope you research all the facts before doing so.

It's unclear what "false information" Poulakidas is accusing Scales of posting on blogs. As to his claim that his wife is a stay-at-home mom, until recently, the DevelopIndy website according to Scales listed her as an employee working as a business developer. The direct mail piece he complains of from the last election was a generic piece the Republican Party sent out on behalf of its Republican council candidates entitled, "The Party's Over", which attacked the Democratic-controlled council for raising taxes and submitting budgets with blank pages during the budget approval process. The direct mail piece did not personally attack Scales' opponent; rather, it tied her to her party's actions over the previous four years since she was running on a platform supporting their actions. Scales says that she discussed with Poulakidas entering into an agreement earlier in the campaign agreeing not to engage in negative campaigning against each other. Poulakidas refused her offer. "He wanted me to know that he was not interested in such an agreement, Scales says. "He added that things would come out, but they 'wouldn't be from him', and that I shouldn't 'take them personally.'" Scales continued, "At our first candidate forum, he told the audience that I had been missing in action on a zoning case that involved his neighborhood." "Afterwards, I sent him a string of about 7 emails proving my involvement in the particular zoning matter and asked him to please not mischaracterize my record again," Scales said. Poulakidas never responded. Scales also points out that she turned down a $9,000 campaign contribution during her race four years ago that was intended to pay for a negative attack ad against her opponent. Scales told the supporter she wouldn't "sell her soul" to win a race.
Posted by Gary R. Welsh at 6:51 AM

The DemocRATS are nipping at lovely Christine Scales's heels. Good luck dear Councilor; you are one that deserves reelection!

You know, sometimes I write to city councilors (including my own).

Christine Scales is the ONLY one who always writes me back and she is not even in my district.

I admire her integrity so much.

And I don't know how many people know this, but she donates her salary to charity.

I surely hope the taxpayers in her district don't elect that lobbyist Kostas who is running against her because they aren't paying attention.