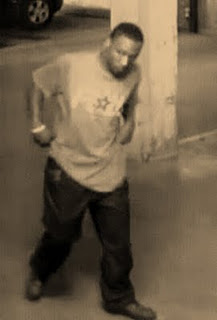 The notorious downtown bicycle bandit strikes again. For the umpteenth time he has broken into our building and stolen personal property. This time he stole items from two cars in our garage. He even took time out for a snack and hung around quite awhile last night before departing on his bicycle, no doubt one of the many he has stolen in the downtown area. A quick check of our surveillance camera system revealed it was the same guy who has struck our building on multiple occasions. Despite being identified and fingerprinted by police, he remains at large and able to strike anywhere he pleases downtown with impunity. I approached a police officer this morning after we discovered the break-in to inform him of the thefts. He was busy issuing a traffic citation to one of my neighbors on the street in front of our building. He said, "Thanks for telling me." Why bother filling out a police report, eh? We can't let the Mayor's meme that "crime is down" get in the way of reality. It's funny how favorable the crime statistics can appear when you simply don't bother writing reports up on them when they are reported.
Posted by Gary R. Welsh at 12:27 PM