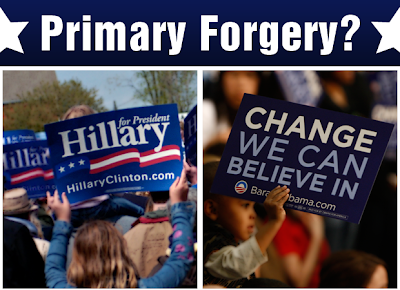 The South Bend Tribune is reporting that a joint investigation by its newspaper and Howey Politics has uncovered dozens, if not hundreds, of forged signatures on the ballot petitions filed by the campaigns of Barack Obama and Hillary Clinton to have their names placed on the Indiana ballot during the highly-contested and critical 2008 Democratic primary race. The allegations, if proven, represent crimes that could still be prosecuted. Forgery is a Class D felony with a statute of limitations of five years. Incredibly, the signature of St. Joseph Co. Prosecutor Michael Dvorak appears twice on petitions filed by the campaign of Hillary Clinton. Dvorak confirmed one of the signatures was his, but he declined to comment after being asked to confirm the authenticity of the second signature that appeared on a separate petition. More than thirty people whose names appeared twice on Clinton's petitions confirmed their signatures had been forged. A forensic signature expert confirmed the same person has signed signatures on petitions filed by the Obama campaign:

Erich Speckin, a forensic document analyst, examined the petitions at the request of The Tribune and Howey Politics . . .

He said there is clear evidence, based on the consistency of the handwriting, that about 10 pages in the Obama petition were filled in by the same person, and another person apparently filled in nine pages. He said it's possible another two people filled in several more pages. Each page in the petition contains up to 10 signatures.

"It's obvious. It's just terribly obvious," Speckin said, pointing to one of the writer's idiosyncrasies repeated throughout the petition's pages.

The full extent of the fakery, which appears to be limited to the state's 2nd Congressional District and specifically St. Joseph County, is not yet known. The situation, however, calls into question whether either Clinton or Obama, both of whom were U.S. senators at the time, should have been on the Indiana primary ballot.

What is remarkable is the forging of names of well-known Democrats on the petitions. In addition to Dvorak, the forged signatures included a former sheriff and county auditor, a county council member, a prominent South Bend attorney and two South Bend police officers. St. Joseph Co. Democratic Chairman Butch Morgan's signatures appeared multiple times on the petitions. He has lawyered up and declined to talk to the reporters investigating the story.

The irony in all of this is that an Indiana Democratic Party staffer and former blogger for the Blue Indiana blog, Thomas Cook, filed a formal complaint in 2008 against the campaign of Sen. John McCain complaining that the petitions he filed in order to make the Republican primary ballot did not contain a sufficient number of signatures. Cook has since completed law school at Indiana University and has become the spokesman for U.S. Attorney Joseph Hogsett's office in Indianapolis. Republicans called Cook's complaint a "hatchet job". Cook's complaint was dismissed after the allegations he made were proven to be untrue. Cook scrubbed the contents of his highly-partisan and sometimes controversial blog, Blue Indiana, some time ago. Some have questioned Hogsett for hiring such a highly-partisan political hack to work in his office. David Capp is the U.S. Attorney for the Northern District of Indiana where the alleged forgeries took place. [An earlier post mistakenly named Jon DeGuilio, a former U.S. Attorney who is now the U.S. District Court Judge in the Northern District, as the U.S. Attorney for the Northern District].

"The irony in all of this is that an Indiana Democratic Party staffer and former blogger for the Blue Indiana blog, Thomas Cook, filed a formal complaint in 2008 against the campaign of Sen. John McCain complaining that the petitions he filed in order to make the Republican primary ballot did not contain a sufficient number of signatures."

It's called PROJECTION - when one group of people projects or attributes their normal activities onto another group of people. You see the Left doing it all of the time.

This comes as old news to anyone who ever worked a Center Twp precinct on election day. Voter ID has been a tremendous help in stopping voter fraud.

Anyone ever wonder why the Dems filed their frivilous law suit to stop voter ID?

Obama is president today because of something very similar to this. When he first ran for the state senate in Illinois he got every primary opponent he faced in the Democratic primary thrown off the ballot because they had filed petitons with invalid signatures. So, yes, I get the projection angle completely, Liberty Justice.