What Can Lugar Tell Us About That Russian Incident In 2005 With Obama? 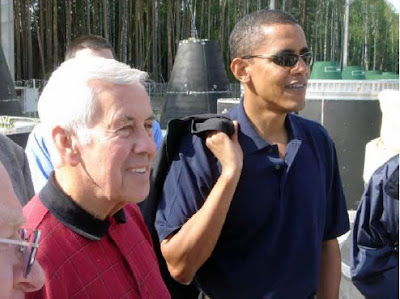 There has always been a bit of mystery surrounding Sen. Richard Lugard's trip to Russia in 2005 with the newly-elected Senator from Illinois, Barack Obama, as part of the Cooperative Threat Reduction program which oversaw the elimination of some nuclear weapons. In particular, was the incident where Lugar and  Obama were detained by Russian authorities for several hours while their passports were inspected. Actually, it was only Obama's passport that the Russians were interested in inspecting, but Lugar has always provided cover for Obama concerning the incident. The American Thinker's Mondo Frazier has an interesting perspective on what it was the Russians were interested in learning more about Obama. Frazier cites Italian sources as claiming the Russians were interested in learning about Obama's role as a spy for the British government, one of the three countries of which he has held citizenship (i.e., there is no such thing as a natural born citizenship requirement in the U.S. Constitution for being president anymore--at least as applied to Obama):


In 2005, then-Senator Barack Obama went on a mission to Russia with Senator Richard Lugar (R-IN). The newly-minted U.S. senator was invited to be part of a Russian fact-finding tour that inspected a nuclear weapons site in Perm, Siberia. The base Lugar and Obama visited was where mobile launch missiles were being destroyed under the Cooperative Threat Reduction program (CTR), which also went by the name of the Nunn-Lugar program.

In 2005, then-Senator Barack Obama went on a mission to Russia with Senator Richard Lugar (R-IN). The newly-minted U.S. senator was invited to be part of a Russian fact-finding tour that inspected a nuclear weapons site in Perm, Siberia. The base Lugar and Obama visited was where mobile launch missiles were being destroyed under the Cooperative Threat Reduction program (CTR), which also went by the name of the Nunn-Lugar program.

What happened next -- after the inspections were over -- was at the time reported by several foreign news sources but was never reported in the USA by the CMM. The Russians detained Obama and Lugar for three hours at the airport, demanding to examine both Obama's and Lugar's passports and search their plane. Some sources reported that the Russians accused Barack Obama of being a spy.

According to an Italian source, the Russians did not accuse Obama of being an American spy; they accused him of being a spy for the British! The report went on to say that the incident ended up involving the White House, the U.S. State Department, and military officials, along with their counterparts in Moscow.

Strangely enough, an official report from Lugar's office about the trip never mentioned the incident. Neither did Barack Obama in 2008 when he was desperate to exhibit some foreign policy chops.

One other oddity: in the fall of 2008, Obama admitted on his Fightthesmears.com site that he had held dual citizenship with both the United States and Great Britain (the site explained that this was due to Barack Obama, Sr. being a foreign national) until 1982. Did the Russians know something about Obama's citizenship in 2005 that ordinary Americans don't know in 2011?

Frazier also discusses Obama's odd trip to Pakistan as a "penniless" 20-year-old student where he spent time with the future prime minister and president of Pakistan with whom he went bird hunting. Who arranged the trip is anyone's guess but, hey, who asks questions when it's about The One?  It would be nice, however, if just one reporter in this state would ask Sen. Lugar for his perspective on this incident during the Russian trip in 2005. I truly would like to hear what he has to say about it. Let's face it, the real reason Lugar is in trouble for re-election is because so many conservatives distrust him because of the way he embraced Obama, a person with whom he arguably should share no ideological or personal connection if the narrative he wants us to believe about him has any validity.

Lugar is a lowlife liberal scumbag...sold his country down the river long ago...I am ashamed i sent the creep money when he ran his lame arse presidencial campaign