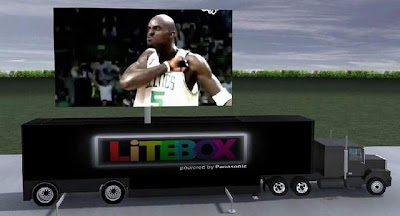 The Indianapolis Star and all of the local TV stations ran with headline stories of the big economic development announcement today promising to bring more than 1,000 jobs to Indianapolis. "We're bringing back the drive-in movie theater, but it's going to be a digital version, and on wheels," Bob Yanagihara, founder of Litebox, Inc. told the Star. Develop Indy's CEO, Scott Miller, described it as "one of the biggest jobs announcements for the city in recent years. Gov. Mitch Daniels and Mayor Greg Ballard are scheduled to make a formal announcement in a couple of hours, along with Yanagihira. I tried in vein to find out information about this company online and came up short. The company's website has nothing more than a short video clip of the product concept and the contact information for Yanagihara. [The link to the company's website brought up an error message when I posted this story saying the bandwidth limit had been exceeded. Not real encouraging for a supposed tech-savvy company.] As the Star describes this new, untested product:

Yanagihara's unusual product calls for a towering video screen mounted on the back of a semitrailer truck. The truck can show up at any site on short notice and play first-run movies, live-streamed concerts and sports.

What's the market for this product? I can't imagine that there are enough buyers today to justify opening up a manufacturing facility to build a product that costs $3 million a piece in the worst economic times since the Great Depression. If the state and local economic development officials weren't skeptical, at least the IBJ's Cory Schouten is expressing some skepticism. Schouten writes:

A West Hollywood man with a short entrepreneurial resume came to Indiana with a big idea to build hundreds of trucks outfitted with giant video screens.

The product is unproven, and so is Bob Yanagihara, the ambitious 50-year-old who dreamed it up.

But Yanagihara said the key word when he met with state and city economic development officials: jobs.

He's scheduled to stand alongside Indiana Gov. Mitch Daniels and Indianapolis Mayor Greg Ballard Wednesday afternoon to announce his plans to build a $21 million manufacturing plant on the northeast side and create more than 1,000 jobs.

His company, Litebox Inc., stands to collect training grants and property-tax abatement worth a total of $11 million if it creates the promised jobs, local economic development officials said. The deal doesn't pose much risk to local governments since the company won't receive tax breaks or grants unless it lives up to its promises.

Yanagihara had pegged the incentive deal's value at $40 million in an interview with IBJ Tuesday evening, but on Wednesday said he had Indiana's offer confused with one from another state . . .

Yanagihara told Schouten the company would eventually employ at least 10,000 employees in all 50 states. How could he know that today with an unproven, untested product that costs this much money to buy? Schouten says the deal originated with DevelopIndy. "It's an ambitious plan. We all recognize that," Todd said. "We have to trust the information we're being given, as we do with all clients." Just chew on this claim Yanagihara makes to Schouten:

He said the new factory near 86th Street and Georgetown Road would churn out eight mobile entertainment trucks per month, with 300 people working on them at a time in three shifts. More than 300 additional employees would work at a "media production office" at 146 E. Washington St., a building Yanagihara said he plans to renovate. Litebox has not yet hired a contractor to build its factory, Todd said. It plans to own, not lease, the space.

The company has not yet built any of the mobile entertainment semitrailers, which will feature 47-foot-tall, high-definition screens. The finished products would sell for about $3 million apiece and feature Panasonic LED screens and Bose sound equipment. Programming would be beamed to the devices by satellite.

"There's demand for these all over the world," Yanagihara said.

Who says there's a demand for this product all over the world? Never forget the old saying that if it sounds too good to be true, it probably is. Now, check out what Yanagihara's past business experience consists of according to Schouten:


Yanagihara said his prior business experience includes selling medical devices and floor tile. (He owns a tile shop called Creative Environments in Los Angeles). His most recent entrepreneurial effort was a website called promotemysong.com that is no longer online. (He said his team is revamping the site's design for a relaunch).

Yeah, I'm real comforted knowing that.  I'm a little bit more than concerned that our state and local officials may have set themselves up for a major public embarrassment if they have not fully vetted this guy, his company and his concept. Public taxpayer dollars are on the line here. If this deal doesn't live up to its promises, we might see a lot of people pointing fingers at each other trying to avoid the blame. State economic development officials won't tell Schouten what vetting they did on this proposed development prior to making its commitment of public financial assistance. My guess is there wasn't much vetting at all.

Check out Yanaghira's Twitter account here. Nothing posted on it since June 28 when he mentioned he was having pizza in Manhattan Beach, California. There's only one, one-word mention of Litebox back on April 20. Wouldn't you expect him to have had something to say about today's big announcement in Indianapolis today on his Twitter account? Also, check out this YouTube clip promoting the product. Not overly inspiring stuff.

UPDATE: It looks like the Star is having second thoughts about this project after the feedback generated from reporting by this blog and the IBJ. Jeff Swiatek offers these clues that this deal is not what it first appeared to state and local officials, who grew antsy and escorted the founder of Litebox away from reporters when he started crumbling under questioning:


The man behind the largest job-creating business expansion to be announced in Indianapolis this year was a bit vague on some key details Wednesday as he stood in a weedy field where the announcement was made . . .

A city development official led Yanagihara off after the public event, cutting short media questions about his planned $20 million factory near 84th Street and Georgetown Road on the Northwestside . . .

Questioned after the announcement, which drew Gov. Mitch Daniels, Mayor Greg Ballard and about 50 news media representatives and others, Yanagihara at first said his financial backers are "well-heeled" individuals whom he wouldn't name. Then he changed his mind, saying, "Actually it's just me."

A city official standing next to Yanagihara then interrupted, saying, "No, it's not just you."

So in the course of the press conference the head of this company goes from saying he has unnamed "well-heeled" financial backers to saying he is financing the start-up on his own. Hmmm. That city official who interrupted Yanagihara is Mike Gant, an employee of Develop Indy. A spokeswoman for the agency seemed confused why Gant identified himself to reporters as working for Yanagihara:

The official, Mike Gant, senior project director for the city's economic development arm, Develop Indy, also wouldn't go into detail about the project's financing. Gant also declined to give his name to reporters, telling them he worked for Yanagihara.

Melissa Todd, spokeswoman for Develop Indy, said she didn't know why Gant identified himself to the media as working for Yanagihara and not saying he was a Develop Indy official.

"Develop Indy will look into this incident. We clearly weren't trying to misrepresent anything to the public or media."

Today's economic development announcement fiasco for Litebox has all the hallmarks of one of those pivotal events late in a closely fought campaign that will be remembered as the turning point in favor of one candidate or the other. Given the current direction this story is taking, election day couldn't come soon enough for Mayor Greg Ballard. I've never seen a story that appeared to be such a big boost for one candidate in the closing days of a campaign turn as quickly as this story has in just a matter of a few short hours against that same candidate. I suspect the Democrats see blood in the water and are now going to go in for the kill, if the media doesn't do that job for them first.

Email ThisBlogThis!Share to TwitterShare to FacebookShare to Pinterest
Labels: Litebox

"I'm a little bit more than concerned that our state and local officials may have set themselves up for a major public embarrassment if they have not fully vetted this guy, his company and his concept. Public taxpayer dollars are on the line here. "

Yes, Gary, but that embarassment would happen AFTER the election.

Paul, I think the narrative is already unraveling. I would expect Kennedy and the Democrats are going to pounce all over this.

How could they do a big announcement and not even have one of their displays built and cranked up at the presentation?

Is this another Carbon Motors?

Scratch that. Carbon at least had a mock up of THEIR gizmo.

Funny how they couldn't make use of the old GM stamping plant. A startup ought to be looking to put their money into product and engineering, not real estate.