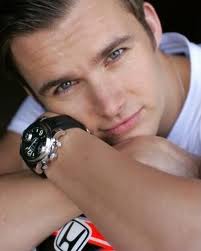 IndyCar Racing League CEO Randy Bernard just announced the tragic death of race car driver and two-time Indianpolis 500 winner Dan Wheldon as the result of a horrific 15-car crash at the series' last race of the year at Las Vegas Motor Speedway. Wheldon, 33, was the winner of this year's Indianapolis 500, his second trip to Victory Lane. In celebration of his life, the race has been called. The remaining drivers in today's field are being led in five parade laps as a salute to his life. Wheldon is survived by his wife, Susie Behm, and two sons, Sebastian and Oliver. Wheldon was a native of Emberton, England. The Star has more on the tragic day in Indy Racing here.

Wheldon's Twitter account reflects some of his last thoughts:
"Big pay day today, $5,000,000 at stake!!! Heading to the track."
A friend tweeted him jokingly suggesting he pay drivers to pull over and let him win. Wheldon responded, "That' not the way to win my man."

The video below shows the view from the onboard camera in Wheldon's car just moments before his fateful crash:

UPDATE: The Star's Bob Kravitz has a fitting tribute to Wheldon here. For a perspective from England, see a story in today's Daily Mail here. News came following Wheldon's death that he had just signed a contract Sunday morning to race next season for Michael Andretti's racing team.
Posted by Gary R. Welsh at 5:14 PM

Prayers go out to your family Dan. May you rest in peace. You ended your journey doing what you loved to do. You will be greatly missed!

We 99 percenters occupying Indy today in support of Occupy Wall Street, upon hearing of Weldon's tragic accident, used the people's mike on Liberty Lawn to ask for all to silently pray for Dan. May he rest in peace.