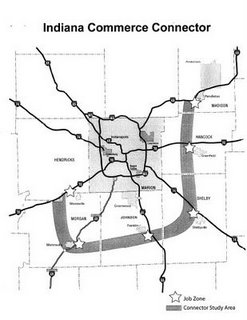 If you're in favor of chewing up more of Indiana's precious farmland with a new outer beltway toll highway promising even more urban sprawl, you'll love the plan Governor Daniels unveiled today. The Star reports on what Daniels is dubbing the "Indiana Commerce Connector":

Gov. Mitch Daniels said today he will seek legislative permission for a 75-mile toll road around Marion County which would allow the new I-69 extension to be toll-free.

Daniels the highway "would create six job magnets, six spectacular economic development sites," as well as ease congestion on I-465, which loops around Marion County. And, he said, there will be no tolls on I-69 from Evansville to Indianapolis.

Could someone try to convince me that this wasn't a plan drawn up by a group of greedy road contractors sitting around the same table with a group of lawyers from Ice Miller? Am I being too cynical here? Why the hell are we spending all that money adding new lanes and commuter routes along I-465 if we're going to build an entirely new road 20 miles away to fuel even further urban sprawl? And there's still no plan for mass transit in America's largest city without a public transit system. I don't want to encourage Pat Bauer to be an obstructionist, but if there were ever anything he should be obstructing, it's this boondoggle. Daniels' lure is to trade off a toll road in the metro area for a toll-free road between Indianapolis and Evansville. The negative environmental impact, however, cannot be overstated.
Posted by Gary R. Welsh at 4:28 PM

This is beyond outrageous. I'd like to think it'll never happen, that's a helluva lotta eminent domain. Oh, yeah, by the way, we're not gonna uproot the people in Hendricks Boone & Hamilton counties. Their McMansions are too purty and they'll hire too many lobbyists to object to it.

I can't recall anyone, ever, suggesting this was even remotely necessary or desired-- which gives some credence to your theory about how it was dreamed up.

Actually, I think its a good plan. The southeastern section outside Indianapolis is primed for huge economic growth. When the Honda plant opens we'll start to see more evidence of this.

I'm glad someone is thinking about the potential relief for I'465. On three sides of town, it's a 80 mph bottleneck 24/7.

But this plan looks a little goofy. All those "somewheres." Mitch was stupid to put this map out. It'll be used as an albatross to hang around his political neck.

Boondoogle. The idea is to create a temporary economy based on transportation construction and sprawl construction, which will further empty out the cities and towns. Then they have to figure out a solution to the empty towns... then they'll dream up a new road to build - and so it goes.

Fox 59 just did a story about this and commented that very few of these projects nationwide are actually paying the dividends promised by politicians. While the southeast side of Indy might need some help, destroying homes and farmland isn't the way to do it.

This is just one more bandage on the state's issue of slowly bleeding to death by not retaining its college graduates. Building a road and creating sprawl won't solve the state's image problem nationwide. Yes, we got the new Honda plant, but that just builds on Indiana's reputation of being part of the auto industry's "Rust Belt."

Some of the comments here sounds like advocates for government controlled relocation, where the government controls where you live. You know like the Nazis did. Doesn't anyone realize the reason the cities are emptying is because of the incompetence and corruption of the DemocRATS that control such large cities and people are sick of paying high taxes just to line the pockets of politicians like Monroe Gray, KingRo, and Bart Simpson. Crime is out of control and nobody in Marion County cares.

Take a peek at a map and look at Tennessee route 840. It's a "superloop" that roughly goes from near the Saturn plant in Spring Hill to east of Nashville and Murfreesboro. The rationale for Tennessee building 840? connecting medium sized cities to the Saturn facility.

Similar rationale here - connect medium sized cities around Indy and have access over to Honda in Greensburg.

"Could someone try to convince me that this wasn't a plan drawn up by a group of greedy road contractors sitting around the same table with a group of lawyers from Ice Miller? Am I being too cynical here?"

Anyone who drives on St. Rd. 9 from Anderson to Shelbyville (meaning thru Greenfield) knows that semi and other delivery vehicle traffic is horrible. Sometimes during the day, you have to basically wait for a yellow light to turn from St. Rd. 9 in Greenfield onto US 40.

People who live in or really close to Marion Co. and never get out will not understand this. As a life long Hancock Co. resident, there was always talk for some sort of 465 by-pass that would go from I-69 near Anderson, down to I-70 just east of Greenfield, and continue down to I-74.

Sorry, but this is really forward thinking here. Our population is not decreasing, it is increasing. Our urban centers are only going to get bigger. As such, the demands for more goods and services will get bigger which means more X-country shipping.

I love the environment, but as places grow in head count, so must the transportation system. Obviously if we had it to do all over again, knowing what we know now, every major city would have a shipping "hub." The hub would be served by an electric rail system powered by nuclear energy. Shipping from the hub to the city/buildings would be done by Van, box truck, or semi depending on what and where.

As it stands, building roads is the only option we have. When I was taking a Geology course at IUPUI, obviously the prof. seemed a little on the environmentalist side. I was shocked when he said he was not worried about the future of oil and such. He actually made sense: Humans will change when they have to for safety reasons. If polution becomes that bad, the government could force everyone to buy flourecent light bulbs. Light bulbs of old that use 100W would be no more.

This by-pass is needed. The Indy MSA is growing. It will be nice to have the semis taking another way around the city.

I am happy to say I agree with you wholeheartedly! Not only would this bring further devastation to Indiana farmland and scenery, I can already hear the uproar from the landowners who will be forced to sell their land for the project.

The only real positives I see for the plan is that it will be an easier route for the trucking of materials to the new Honda plant... I'll bet money the new road was part of the reason for Honda choosing the location that they did. Additionally, it will cut down on the I-69 traffic.

I can see where the new road will provide new jobs, but jeez, is it really worth it to lose even more wide open spaces. There's not many left!

Please, please lets think about some mass transit, imagine the ease of travel if we had something like London's underground. What will happen if gas gets up to $4 or $5 a gallon will people still want to live miles from the city? Why are we planning for a future that includes unlimited cheap fuel, when we know it just isn't going to happen.

I've traveled many of the major cities in Europe, and the U.S. and been able to get everywhere on mass transit. Once I knew someone who tried to take our pathetic system from 465 and 56th street on the east side to Broad Ripple, probably no more then 4 miles, it took three hours and involved a lengthy trip downtown, and three or four transfers. We're just so backwards here in hooterville

I have to disagree wtih you on this one Gary. This city needs to relieve traffic from 465 and from the state roads east and south of Indianapolis. I agree with other readers that for those who don't venture out to Hancock or Madison County, and don't drive through Johnson County, you won't realize how overdue this project is.

I am not sure that I think a toll road here is the answer to all our road construction costs, but I am extremely happy to see Mitch looking at an update to a region that has not updated its comprehensive plan in several decades. Someone needs to help the outer ring counties deal with the growth they are all seeing. Too bad their isn't a plan for traffic going to/from Chicago to also bypass the city (and to relieve traffic on the north and northeast corridor of I-465 -- but that may come eventually.

People need to stop being so cynical (this was part of the deal for the Honda plant, we will have no green space left [gimme a break!], this will only be construction jobs, etc). Growth has to start somewhere, and a comprehensive plan for it is a great start! Go Mitch! Keep moving Indiana into the late twentieth and eventually the twenty-first century! We still have lots of catching up to do!

here's the problem: will we see any type of regional land use planning at all? seems like this ought to be part of the package.

You all are missing the point. Instead of talking about how the national media blamed Mitch personally for the loss of three congressional seats - look at what we're talking about..brilliant move for Mitch to take control of the media. BRILLIANT!