Elrod Upset In The Making Over Mahern? 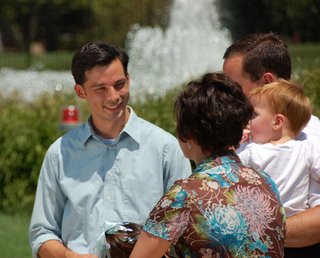 While state and Marion County Democrats have focused their attention on knocking off two long-time incumbent Republicans and saving one of their own in a tight race, a Republican upstart in another race may be poised to upset a long-time Democratic veteran. Democrats have been focusing on the legislative races between Rep. David Orentlicher (D) and Kathryn Densborn, Rep. Larry Buell (R) and John Barnes (D) and Sen. James Merritt (R) and Russell Brown (D). Flying almost undetected under radar, is local attorney Jon Elrod, who is challenging Rep. Ed Mahern (D).

The Democratic leaning House District 97 encompasses much of the downtown and nearby southside neighborhoods. The district has been represented for more than a decade by the chief architect of the 2000 Democratic-gerrymandered House district plan which gave Democrats control of the Indiana House through 2004. Little attention has been paid to what is perceived to be a safe Democratic district, but a much younger Jon Elrod has been quietly working the district in a door-to-door grassroots effort which had gone unnoticed by Democrats until the last few days.

Unlike past Republican candidates, Elrod has a philosophy that more closely represents the views of the people of the district. While he is economically conservative, Elrod has taken a much more moderate view on hot button social issues. Elrod, for example, opposes a constitutional amendment to ban same-sex marriages and supports civil rights protections for gays and lesbians just like Mahern. By contrast, Elrod agreed with the position taken by Eric Miller's Advance America organization on just one of ten issues--repeal of the property tax--according to the group's 2006 voter guide.

Until the last few weeks, Mahern had a huge fundraising advantage over Elrod. Mahern in his pre-election report reported raising $61,023 with more than $66,000 in cash-on-hand. By comparison, Elrod's pre-election report showed just $5,140 in contributions and only $2,586 in cash-on-hand. In recent days, however, the Indiana Republican Party and the House Republican Campaign Committee have dumped more than $30,000 into Elrod's campaign, allowing Elrod to purchase valuable TV air time to promote his campaign in the costly Indianapolis market.

The Indiana Legislative Insight's Ed Feigbenbaum also see this race as a possible sleeper. He writes this week, "The Mahern seat is the sleeper in this bunch, with the Republican running a door-to-door campaign under the radar, and needing perhaps to pick up fewer absolute votes to win here than anyone would need in any other district outside of HD 100." He adds, "Only 6,000 or so votes will be cast here this year, vs. about 12,000 in most other Indianapolis districts." The results in this race should be interesting to watch on election night. It certainly has Mahern doing some last-minute scrambling this weekend to save the seat he carved out for himself.
Posted by Gary R. Welsh at 2:46 PM

This is a joke right?

Let your readers know that the mayors office made some last minute changes to polling locations. I know this has happened in Pike, Washington and Franklin Townships. Haven't heard if it's county wide. Of course these are all strong republican areas. Just another dirty trick from the 25th floor.

You're going to have to help me with that one. The county clerk's office runs the elections, and that' Doris Ann Sadler, a Republican. The mayor doesn't get to decide polling locations. There is an advisory committee, which Beth White serves on, but the mayor doesn't make those decisions.

I have to admit that Jon has done a nice job of getting out into the neighborhoods. He stopped by the house about a month ago and has sent two handwritten, personalized follow-up notes since. Everything else aside, he gets an an "A" for effort.

Jon is a great guy--exactly the sort of Republican the party needs right now.

I hope he pulls out an upset!

I have received no less than three pieces of mail from Elrod, every day for the last several days.

Actually, he is the kind of Republican I wouldn't mind seeing in office, I just wish he was in a different district. Mahern has done a good job representing me and I have no reason to switch. He has been very good to the GLBT community and we should not turn our backs on him.

AI, All I know is polling locations have been changed in the last few days. I tried to find out all the locations the first of October and was told by someone in the election board that they didn't even know the changes yet. They were waiting to get the info from the MAYOR'S office.

The Mayor's Office may sign contracts for the polling places, to pay rent, through its Administration Division...or Comptroller's Office. The selection of polling places is strictly in the purview of the County Election Board, which is 2-1 Republican. Until Jan.1 that is.

If you want to review some of that group's ridiculous political decisions (which have cost us over a million dollars in legal fees)in the past four years, be my guest. Those days are soon to be history.

The advisory panel AI cites is a volunteer group set up by ordinance, which advises the Election Board on polling place accessibility vis-a-vis the ADA.
Doris Ann's record on that, along with most election issues, was dismal. Beth White serves on or chairs that bipartisan panel.

I'm no Eddie Mahern fan, but he did carve out this district for himself.

The Elrod family is well-known in political circles.

But, Eddie[s right--Jon is a member of the Center Township Board and has supported township government's preservation, ala Drummer and Ricketts.

For that reason alone, he should not be elected.

Ed has been a stalwart friend of the LGBT community. So is his entire family. I am getting kinda tired of Maherns in public service, but Ed will win easily.

Well well. Seems it is a joke. Ed has gived outstanding service to his district as has his son Dane and his brother former Sen. Louie Mahern. Jon's obvious self interest is plain here.

You are kidding? Dane Mahern is the biggest idiot this side of Sweetpeashake Gray.

s.h, face it. Your just another losing stirstick and your head hurts from spinning round and round. After Tuesday you can go back to just being a jerk.

How good are Mahern and Elrod on LGBT issues? I urge everyone to go to project vote smart, a bi-partisan group that both Elrod and Mahern have responded to. See how each has answered the questions on civil unions and see how both have answered the question on including sexual orientation in the civil rights section of the state code. You will see that Mahern answers yes to both and Elrod has answered neither question. It could not be clearer. Go to www.votesmart.org. Type in Elrod and then go to Issue Positions then scroll down. Do the same for Mahern.

Mahern was one of 12 members in the house who voted against the constitutional amendment. If you care about gay issues the choice could not be clearer.

I like Jon's position on the marriage amendment, however I believe he is not yet sold on nondiscrimination.

His is a typically Libertarian point of view... and he might be persuadable, but last I knew, which was about a month ago, he did not support nondiscrimination legislation.

Is there more recent information to the contrary?