Brokeback Mountain To Open In Indy Next Wednesday 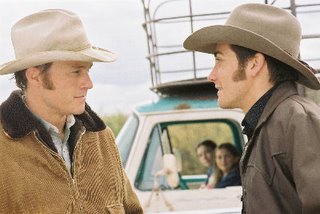 The highly acclaimed gay romance movie, Brokeback Mountain, will open in Indianapolis sooner than anticipated. Keystone Art Cinema will feature the movie beginning Wednesday, December 28, 2005. The theater originally expected to open the movie in early to mid-January. The huge box office success in the limited theaters the movie has been shown has caused the distribution company to step up its rollout. The movie grossed more than $2.5 million after its second week of playing in just 69 theaters.
Posted by Gary R. Welsh at 1:21 AM