The Wait for Brokeback Mountain 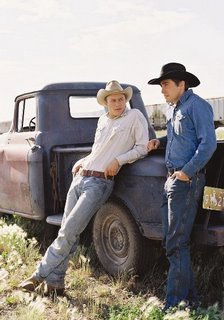 Anxious movie-goers are going to have to wait a little longer for the arrival of Brokeback Mountain in Indianapolis. According to a spokesman for Landmark Theater's Keystone Art Cinema & Indie Lounge, where the highly acclaimed movie will debut in Indianapolis, the film will not open until early to mid-January, 2006, although the distribution plan could change.

Perry Glorioso said, "I know that’s probably later than you’d like, but it is not unusual for the distributor of a sophisticated film like Brokeback Mountain to open in a few major cities first, then slowly roll out the film to other cities around the country once interest and good word-of-mouth has reached a fever pitch." He added, "It’s basically a marketing strategy that works well for films that have to compete for attention against mega-budget commercial films. In any case, release patterns are, by and large, determined by a film’s distributor, not by the film’s exhibitor."

Interest in the movie has certainly hit a fever pitch. It broke per screen average records in the three cities it premiered in last week, New York, Los Angeles and New York, pulling in more than a half million from just 7 theaters. The total budget for this movie about an American romance between two gay ranch hands was only $12.5 million, despite the fact that it features two A-list actors, Heath Ledger and Jake Gyllenhaal.

The movie's lean budget has not stopped it from garnering awards. It has been nominated for 7 Golden Globe awards, including best motion picture, best actor (Heath Ledger), best supporting actress (Michelle Williams) and best director (Ang Lee). It has also been awarded best motion picture by the New York Film Critics Circle and the Los Angeles Film Critics Association. Most observers expect the movie to pick up several Oscar nominations. It is an early favorite to receive an Oscar for best motion picture.
Posted by Gary R. Welsh at 6:47 PM