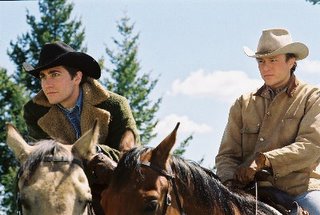 One of our favorite gay bashing Christian right organizations, Dr. James Dobson’s Focus on the Family, has taken up the movie review business over at pluggedinonline.com. With all the media attention focused on Brokeback Mountain, the organization couldn’t let this one slip by without comment. Reviewer Steven Isaac adds quite an interesting perspective to the movie we thought we would share with you. Spoiler Warning: If you have not seen the movie yet, you may not want to read further.

In his opening comments Isaac says: “Take everything you know about how love works (or doesn't work) when two people who are crazy about each other find themselves doomed to a life of separation by time, distance or culture—and remove the woman from the equation. What's left is Brokeback Mountain.” Well, there’s a little more to the movie than just that as Isaac’s review readily admits.

Isaac, to his credit, does find some redeeming quality in the movie. Isaac cites Ennis del Mar’s (played by Heath Ledger) reluctance to live with his gay lover, Jack Twist (played by Jack Gyllenhaal), as a positive element of the movie. He says: “Usually it's a negative thing when people give in to the societal norms around them and give up on their dreams, refuse to step across racial divides, etc. But here, Ennis' reluctance to live with Jack is a good example of how established—biblical—morality within a culture can help people make right decisions.” A disappointed Isaac observes that the social pressures aren’t strong enough to “keep [Ennis] from repeatedly having sex with Jack, though.”

Isaac also tells us that the movie unwittingly hints at the dangers of homosexuality. Quoting Caleb Price of Focus on the Family he writes: “Contrary to the nearly ubiquitous modern portrayals of homosexuality, in Brokeback Mountain the lifestyle is neither glamorous nor normal and healthy," he said. "We see that each character had root causes to his same-sex attraction. And then we see their God-given desires to be affirmed by members of the same sex met in sinful, ungodly ways. We see the soul ties that come along with carnal relations and the ensuing devastation to wives and marriages when the forbidden fruit is eaten.”

Apparently, the evil is being who God made you rather than a person you pretend to be to conform to society norms according to Isaac and Price. As to whether homosexuality is “glamorous” or “normal and healthy”, it seems a homosexual person is a better judge of that than either Price or Isaac. It is unclear what he is referring to as the root causes of Jack’s and Ennis’ homosexual tendencies. Are we to believe that the death of Ennis’ parents when he was still a young boy and having to be raised by his older brother and sister is a root cause of a homosexual tendency? Or the fact that Jack was never close to his father growing up? That hardly seems credible.

Isaac also quotes Price as saying that “the film clearly depicts the homosexuality of the characters as bondage. In one scene Jack exclaims profound exasperation that he and Ennis are not able to 'quit' each other. One can't help but wonder what their respective lives might have been like had they poured their energy and attention into their wives, families and careers instead of homosexuality.” Again, neither Isaac or Price can appreciate that a person doesn’t choose homosexuality over heterosexuality; it is an innate characteristic that neither can run away from no matter how hard they try. One man’s bondage is another man’s love.

Isaac, surprisingly, finds the movie spiritually uplifting. This is because Jack and Ennis are both church-going men he says. One was a Methodist and the other was a Pentecostal. Ennis and his wife, Alma, are married in a Christian ceremony Isaac observes. There is that moment, however, when Isaac gives us that Ennis laments that he doesn’t want to be around that “fire and brimstone crowd” when his wife asks him to attend a church social. Gee, I wonder why?

As to the sexual content, Isaac calls it mostly “rough-and-tumble” with “lots of pushing, shoving, grappling and holding.” Isaac seems almost pleased that both Jack and Ennis had heterosexual sex. “Ennis and Alma get physical twice. Both scenes are graphic; one includes breast nudity.” Yum Yum. But Isaac Laments, “[T]hose straight relationships are shown to ultimately matter little to Jack and Ennis. They just can’t wait to cheat on their wives when the opportunities present themselves.” For his lady readers, Isaac adds that Jack can be seen nude “from side and back” washing his clothes, and Jack and Ennis “jump naked into the water for a swim (seen from a distance).” Darn.

What’s particularly noteworthy is how Isaac, in discussing the film’s violence, quickly brushes aside the brutal violence depicted by the film against gay men. As Isaac put it, “There's graphic talk about a man being mutilated and murdered. Onscreen, that man's corpse is seen, and another man is beaten to death.” In the actual film, Ennis tells Jack of a dead gay man his father took him to see in the Wyoming wilderness as a young boy to teach him a lesson about what happens to queers. The dead man was involved in a gay relationship with another cowboy. The local men didn’t take too kindly to the relationship so they beat one of the men to death, tied his genitals to a rope and drug him behind a horse until his genitals were severed from his body. Ennis suspected his father may have been one of the vigilantes.

The other man who is beaten to death to which Isaac refers is Jack. After giving up on Ennis, Jack finds another man, leaves his wife and decides to return to his father’s ranch in Wyoming. The locals down in Texas wouldn’t stand for it. He was beaten to death with a tire iron by several men. Jack’s wife would later tell Ennis that he died changing a flat tire when the tire exploded in his face and he bled to death without help nearby, even though she knew the real truth of his murder.

As with the brutal beating death of Matthew Shepard in Wyoming a few years ago, many on the Christian right would like to pretend it didn’t happen. Isaac clearly doesn’t want any sympathetic message leaping from the screen about the violent hate crimes which have been inflicted upon gay men in our country, which the “fire and brimstone crowd” have helped to foment.

As to other negative elements of the film, Isaac offers one we find quite humorous. He worries that the film will make wives suspicious of their husbands. “[I]t could have the effect of making wives suspicious of husbands who have good male friends. After watching this movie, old-fashioned male bonding exercises such as fishing, hunting and camping feel like nothing more than weak excuses for nefarious ‘hook ups.’” Is Isaac hiding something from his wife?

Proving just how much he doesn’t get it, Isaac reacts to the following comment made by Jake Gyllenhaal about Jack’s and Ennis’ relationship: "When two people love each other, they love each other. And people should hold on to it as hard as they can, whether it's homosexual or heterosexual.” Isaac retorts, “He's partly right. But if he's talking about the kind of love shared onscreen by Jack and Ennis, he's conflating the meanings of the words love and lust.” Sexual love, he tells us, is a “form of love God reserves for a man and a woman who have embraced the gentle bonds of marriage.”

What really upsets Isaac about Brokeback Mountain is that its director, Ang Lee, “soft-sell[s] the damage done by [Jack’s and Ennis’] choices.” He wrote, “You don't walk away from Brokeback Mountain thinking about the destructiveness of acting on homosexual temptations. Rather, you're left with the idea that these cowboy-lovers would have experienced none of this pain if only social and moral norms had allowed them to pursue their passion from the get-go . . . That's a powerful message far too many people are accepting, as evidenced by the thunderous applause I heard swelling around me when the credits began to roll.” That’s the real truth about this movie that truly frightens folks like Isaac and other’s on the religious right.

Make sure you see this incredible movie!!

And many are Linda. Reports from tonight's movie-goers indicate that today's shows were either sold out or nearly sold out at Indy's Keystone Arts Cinema.