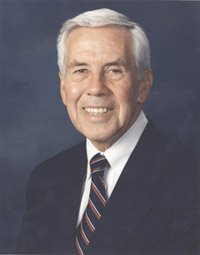 In an e-mail communication to Advance Indiana editor Gary R. Welsh today, Sen. Richard Lugar stated unequivocally that he supports the pending federal hate crimes legislation in the Senate, which adds sexual orientation and gender identity to the federal hate crimes list of bias-motivated crimes. “I have previously supported the Local Law Enforcement Enhancement Act, often referred to as the “hate crimes” legislation, and will continue to do so,” Lugar said.

Lugar’s support for the pro-gay legislation will likely offend extreme Christian right organizations, such as the American Family Association and Advance America, but it is the right position for him to hold. As Advance Indiana reported earlier this week, the AFA took out full-page ads in the Indianapolis Star urging readers to contact Senators Lugar and Bayh to urge them to oppose the hate crimes legislation. Those ads proclaimed: “Hate Crime Legislation = Unequal Justice in America.” Similar ads in Virginia apparently convinced Sen. George Allen to switch his support of the legislation to opposing it.

Lugar does not see it as unequal justice at all. He said: “Hate crimes legislation will not prevent all acts of hate. But as a former mayor, I believe in providing local authorities and the federal government the tools they need to deal with hate crimes. It is particularly important that communities can call on the federal government to supplement their resources and expertise when they are faced with a potentially volatile circumstance. We must work together at all levels of government and throughout society toward a coordinated effort to stop violent crime.”

Lugar bases his support for the hate crimes legislation on his experience as mayor of Indianapolis. Lugar wrote: “As Mayor of Indianapolis in the late 1960’s and early 1970’s, I oversaw a big city police department that had to deal with many crimes and incidents involving hatred and discrimination. Several months after I assumed office, Dr. Martin Luther King, Jr. was assassinated. Many cities across the country experienced riots and burnings after the shooting. In Indianapolis, we did our best to hold the community together. On some occasions maintaining order and the rule of law was a difficult task that required tremendous amounts of city resources, a no-nonsense approach to law enforcement, and a willingness by the entire community to listen to each other. At stake was the stability and peace of the entire community. This experience taught me that maintaining order in our society cannot be taken for granted and that a single act of hate, such as the assassination of Dr. King, can have far-reaching consequences.”

With Lugar’s solid support for the legislation and Sen. Evan Bayh’s support as a co-sponsor of the legislation, the Christian right’s big money and menacing political threats have struck a dry hole in Indiana. Let’s hope that Marion Co. Prosecutor Carl Brizzi’s proposed state hate crimes legislation receives more sympathetic ears from Indiana lawmakers than it has in the past.
Posted by Gary R. Welsh at 5:44 PM