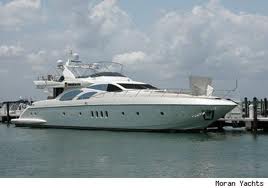 Moran Yacht & Ship in Bodrum, Turkey still has the multi-million dollar yacht, Obsidian, owned by indicted Ponzi schemer Tim Durham listed for sale. It's unclear why this prized piece of property was never returned to the Ohio bankruptcy trustee in the United States to help recover the more than $200 million Durham swindled out of small investors in Ohio. The criminal trial of Durham and two associates begins in a federal district court today in Indianapolis after a jury was chosen on Friday. The Obsidian's location in Turkey raises questions about whether a prominent Indianapolis businessman has anything to do with the fact that the yacht is in Turkey instead of its former location in Miami where Durham had it docked, something local FBI agents are probably too stupid to ask.

UPDATE: Ross Tannock of Moran Yacht writes to me to say that Durham sold the yacht a few years ago. Tannock said, "It was sold a few years ago and the people kept the name. We represented the buyers not the seller." The FBI raid on Durham's offices took place in November, 2009. According to wiretapped conversations in the months leading up to the raid, Durham and his business associates were scrambling to keep Fair Finance afloat, which they had plundered to finance their high life style. Durham whined to Cochran in one conversation about having to sell some of his collector cars to raise money when Cochran complained about Durham's extravagant spending on luxury items.
Posted by Gary R. Welsh at 6:36 AM