When Modern Technology Morphs Into UFOs 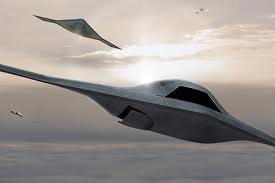 Motorists on the Capital Beltway outside Washington, D.C. see what appears to be a saucer-shaped craft being transported late at night on a flatbed truck and believe they've just witnessed a UFO. Last night's sighting is among a string of recent sitings of futuristic aircraft civilian witnesses believe are from another world. As it turns out, the aircraft witnesses saw last night was one of our own--a X-47B Unmanned Combat Air System being transported from Edwards Air Force Base in California to the Naval Air Station Patuxent River in Maryland for testing. America's military is increasingly deploying high-tech drones throughout the world for spying on other countries and carrying out targeted aerial strikes against persons our President deems to be hostile to U.S. interests. Iranians recently recovered an American drone that crashed on its soil and claim they are in the process of replicating the unmanned aircraft after its scientists were able to crack its encrypted code. Two days ago, a drone similar to the one being transported on the Capital Beltway crashed not far from the nation's capital in a marshy area near Salisbury, Maryland. Of more concern are reports that American officials are using drones to spy on our own citizens, using some drones described as being as small as golf balls. Those reports prompted Kentucky Sen. Rand Paul to introduce legislation requiring a court-ordered warrant before the government could deploy drones to surveil its citizens.

Laying aside privacy concerns, a larger question is how we would ever know that we have been visited by aliens from another world when aircraft of earthly origin take on the shape and size of documented UFO sitings over centuries of time predating the era when modern man first began building and flying aircraft. [See depiction of alien crafts in ancient artwork and other historical accounts here] Perhaps the most famous UFO siting in American history was the reported crash of a flying saucer at Roswell, New Mexico in 1947. A U.S. Army press officer initially released a press statement reporting on the crash and recovery of a "flying disc." A day later as media interest was sparked by the initial report, American military officials retracted the earlier press statement and reported that a weather balloon had been mistaken for the flying disc.  Numerous eyewitnesses contradicted the government's account and even reported the recovery of alien beings, at least one of which was reportedly alive at the time of the recovery. A few years later in 1952, numerous news reports documented unidentified flying saucers buzzing the nation's capital, which reportedly prompted President Harry Truman to place military jet pilots on a 24-hour nationwide alert against the flying saucers with orders to shoot them down. Given the design of today's most modern aircraft, the government would always have plausible deniability that what a civilian believes to be a UFO of alien origin is actually one of our own.
Posted by Gary R. Welsh at 6:25 PM

Email ThisBlogThis!Share to TwitterShare to FacebookShare to Pinterest
Labels: UFOs

I can just imagine driving down the interstate and seeing that on the back of a truck...too funny!

We are most definitely being visited and have been throughout history.

Check out this ancient through renaissance art depicting UFOs.
http://lithiumdreamer.tripod.com/ufoart.html

A great site to watch long unedited interviews with government insiders regarding Exopolitics is ProjectCamelot.org

They have literally 100's of hours of interviews on that website.

Also, good to watch is the press conference at the National Press Club presented by Dr. Steven Greer of the Disclosure Project. Here you can see testimony of top military and aviation professionals speak to what that they have seen first hand with their own eyes regarding UFOs and aliens (both dead and alive). Each testified that they are prepared to testify before Congress and tell everything they have witnessed.