Will Mitch Finally Return The Campaign Contributions He Accepted From Durham? 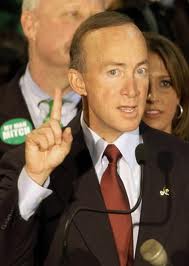 In a bit of irony, the same week we learn that Gov. Mitch Daniels will become the new president of Purdue University when he leaves office at the end of his term early next year, one of his largest campaign benefactors, Tim Durham, was convicted on all twelve charges that he ran a Ponzi scheme at the expense of thousands of small Ohio investors in the Fair Finance Co. A federal bankruptcy trustee, Brian Bash, has been working feverishly over the past couple of years trying to recover as much of the more than $200 million of their investments Durham and his associates squandered on their mansions, sporty cars, private jet, yacht, Playboy parties and gambling-fueled trips to Las Vegas. Durham also showered politicians like Gov. Mitch Daniels with large contributions.

Daniels received more than $200,000 from Durham, but he has been adamant in his refusal to aid Fair Finance's bankruptcy trustee by returning the ill-gotten funds. State Sen. Mike Delph was one of the first politicians to return Durham's contributions, and his lead was soon followed by a string of other politicians. Daniels has remained the last holdout. His campaign committee has returned only about $3,000 of the contributions he received from Durham. The bankruptcy trustee earlier this year sued Daniels to recover $90,000 from him. Daniels, who is personally worth more than $50 million, has defended his decision not to return the money based on the fact that the money is already spent. Perhaps the trustee of Purdue University should condition Daniels' appointment as the university's president on his agreement to settle up and at least repay the $90,000 the trustee has requested he repay. C'mon, if Jami Ferrell, the Playmate who received more than a quarter million dollars from Durham could repay $55,000 to the bankruptcy trustee, surely Daniels could find a spare $90,000 lying around somewhere.
Posted by Gary R. Welsh at 8:50 PM

FORK IT OVER, SHORTY!