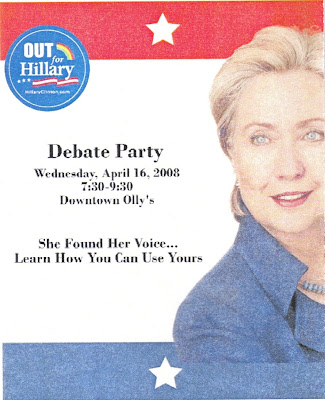 It's the experience, stupid! That's the message I heard over and over tonight from nearly three dozen members of the Indianapolis GLBT community who gathered tonight at Downtown Olly's to cheer on Sen. Hillary Clinton in her debate with Sen. Barack Obama. Event organizers, Adam Freeman and Nick Murphy, were very pleased at the number of supporters who turned out tonight to show their support for Clinton. Freeman, an executive assistant at AT&T, and Freeman, IT Director for the Julian Center, both cited Sen. Clinton's experience as the number one reason they preferred her over Sen. Obama as did almost everyone to whom I spoke tonight.

Because of her experience working closely with her husband, former President Bill Clinton, Freeman expressed confidence that she would know what to do to get things done from day one. He feels Obama wouldn't hit the ground running and would have to learn on the job. Murphy notes that Clinton was the first First Lady to share offices in the West Wing of the White House with the president's staff as evidence of her knowledge of running the federal government. Murphy says his familiarity with Indiana legislators with experience similar to Obama's doesn't give him much confidence that Obama is ready to be president.

Morgan told me that Clinton already has specific plans on how she will run the country if she is elected. "Obama speaks in generalities, while she is more specific about her plans," she explained. Zack thinks Obama is "brilliant and invigorating", but he still turns to Clinton because of her experience. "She won't need on-the-job training like he will." Zack earlier supported Obama before switching his allegiance to Clinton. He was very disturbed that Obama used ex-gay gospel singer Donnie McClurkin to campaign on the same platform with him during the South Carolina primary. No longer gay, McClurkin now claims that homosexuality is a choice, a view that is anathema to GLBT voters. To a lesser degree, Obama's pastor, the Rev. Jeremiah Wright, concerned Zack. "I agree with most of Wright's views, but I have a real problem with his "Goddamn America" view. "He doesn't recognize the progress we've made as a country."

Lori is unabashed about her support for Clinton. As a woman, she thinks the media coverage of Clinton has been very sexist. She thinks Clinton is strong on GLBT issues and health care, two important issues to her. Like almost all of the people I interviewed tonight, Lori thinks both candidates are strong on GLBT issues. She thinks the Clinton campaign, however, has been more effective at reaching out to and organizing support with GLBT voters. The Rev. Wright flap didn't bother her as much as the way Obama handled it after it became a matter of public debate. Clinton has been through so much over the years she is better prepared to act in difficult times Lori explains.

I did manage to find one Obama supporter in the crowd. Kevin Fyfe likes both candidates, but he is supporting Obama because he thinks that there are just too many Clinton haters in Indiana, and that Obama has the ability to attract voters Clinton will never get. He thinks Obama will be competitive in November in Indiana if he is nominated to run against Sen. John McCain. On that note, everybody I spoke to plan to support the Democratic nominee for president regardless of whether it is Clinton or Obama. And almost everyone was in agreement that Clinton isn't getting a fair shake from the media. Several people complained about Obama's repeated use of the race card in this campaign when it's convenient.

I tried to gauge the reaction to U.S. Rep. Andre Carson's endorsement of Obama today. Overwhelmingly, the people gathered tonight support David Orentlicher in the 7th District primary race for Congress. Some of the people I spoke to complained that Carson had reneged on his earlier pledge to stay out of the race and let the voters decide. Most thought his endorsement would make no difference one way or the other and would have little impact on his own race.
Posted by Gary R. Welsh at 8:39 PM

Speaking of playing the race card, out of the 36 folk there, how many were African-American or Latino?

I was interested to hear that Carson "earlier pledge to stay out of the [Presidential] race and let the voters decide."

On LGBTIQ issues, the Green Party really blows the Democrats out of the water. The Greens 100% support same-sex civil marriage and stand firm on trans and other issues where the Democrats waiver(and lots of Republicans just shudder). We just need a system that allows us to vote our hopes and not our fears. Instant Runoff Voting Now!

IndyFacts: aren't you afraid of getting cooties from hanging out around in here with so many homosexuals? Your candidate Carolene Mays certainly voted for SJR7 which was a vote against LGBT folk (what you call "Sodomites").

Your candidate is absolutely despised by gay and lesbian voters of the 7th District.

Talk about a group of losers. Clinton and David O supporters.....those poor people dont have a chance. No wonder gays have such a difficult time in Indiana when groups of us back losers who have nothing to offer us.

First, YOU ARE UNHAPPY that the gay community DOES NOT SUPPORT ANDRE.

Do you have any idea how Muslims feel about gays? You should visit the Middle East and do a study.

Second, it may surprise you that there are individuals in the gay community do NOT consider marriage or SJR7 a major issue for selecting a candidate for public office. There are obviously Gay Republicans and Gay Democrats who feel this way!

indyfacts for not worthy of a response, that comment is a response. As a gay man I do not consider gay marriage at all important. I have been in a 22 year companionship and am more legally bound to my partner without marriage than I would be if I were given the governments blessing of some marriage ceremony and a piece of paper that says Marriage License.

As for wilson46201, I think if we take Abdul's position with the panhandlers toward him. Ignore him and he will go away. From my slight investigation we all spend way too much breath (which I need considering the cancer) on commenting about his comments which in most instances are just plain deaf, dumb, blind comments. You'd think he sleeps with Andre the way he defends him.

I admire ardent supporters of all kinds regardless of their political positions but some people go so overboard as to be warranting of ignored. I don't think the GLBT community as a political force even exists. Most of the GLBT community I see are splintered like the rest of the nation and have little common issues. Marriage surely isn't one of them. I think we all are interested in pocketbook issues and national defense. I think all other issues are on the fringes of interest except for the radicals of both sides.

I was interested to hear that Carson "earlier pledge to stay out of the [Presidential] race and let the voters decide."

Thanks for the good advice!

Pigs will fly before instant run-off voting is adopted.

..but the majority of the gay community does support Andre.